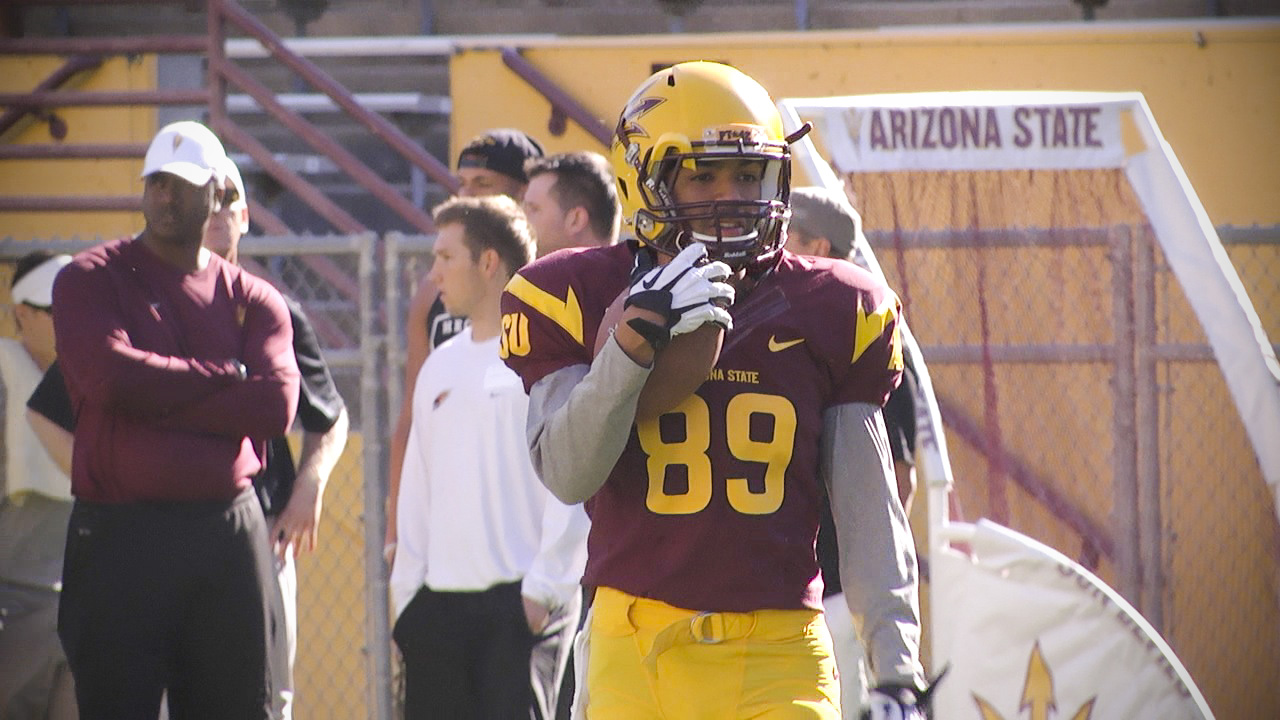 Arizona State head coach Todd Graham has made it very clear that he wants to give his walk-on players every opportunity to ultimately achieve scholarships with his team. That was seen last year as he gave out three scholarships to walk-ons.

ASU redshirt freshman and walk-on Frederick Gammage has stood out this spring at the wide receiver position, which happens to be one of the Sun Devil’s weakest positions depth-wise and as a kick returner. The former Brophy Bronco had interest from smaller schools out of high school and had a scholarship offer to play for Western New Mexico University.

However, Gammage passed that up for the opportunity to play for the team he grew up down the street from and was a huge fan of as a kid.

“I did decide to come here and I knew it was going to take hard work,” said Gammage. “I have put on a solid 20 pounds and am doing what the coaches have asked me to do…I felt myself that I had the ability to play here so I wanted to come and prove that I could play here.”

“Probably by far when you look at all of our walk-ons he is a guy that stands out most to me,” said Todd Graham. “Runs great routes, obviously comes from a great program.”

Gammage seems to be doing a lot right for himself and his team to be singled out like that by his head coach. He mentioned he has gained 20 pounds, so what has he been working on specifically to try to cement a roll on this team?

“Just trying to make plays,” Gammage stated. “The biggest thing I need to work on is learning the offense a little faster but just making plays. We need playmakers and that’s what I’ve got to do.”

One of the three walk-ons that received a scholarship last season was wide receiver Kevin Ozier who had a solid 2012 season. He went the path that Gammage is hoping to achieve and has been a big mentor to him.

“That’s my biggest mentor,” mentioned Gammage. “He talks to me all of the time trying to give me pointers and things like that coming from a walk-on position. So he’s been a great mentor.”

“This is a great place to walk-on if your from the valley,” Graham mentioned. “So he’s (Gammage) a guy who’s been up front this spring and doing an outstanding job. Got a great future here.”

Gammage’s Sun Devil roots run deep. Not only is he from Tempe but has blood lines that come from an ASU hall-of-fame baseball player by the name of Luis (Jose) Lagunas. It is Gammage’s hope that his hard work can pay off so that he can leave a legacy of his own.

ASU continue’s spring practice leading up to their spring game this Saturday from Sun Devil Stadium in Tempe.