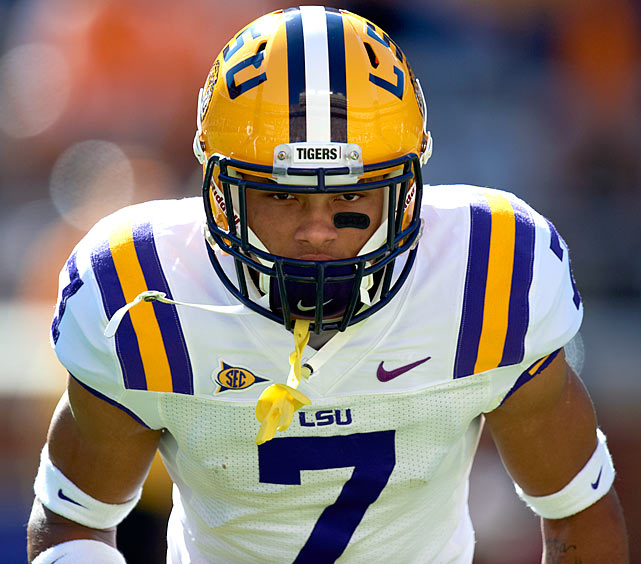 Tyrann Mathieu was an electrifying presence for LSU in his two years there.

He was a consensus All-American, and was expected to explode in his junior season in Baton Rouge, La., but due to some off the field issues, head coach Les Miles had to dismiss him from the team.

“We lose a quality person, teammate and contributor to the program,” Miles said at the time of Mathieu’s dismissal.

One team’s loss is another team’s gain. The Cardinals took a chance on Mathieu, taking him with the 69th pick in the third round of the NFL Draft.

Mathieu’s career at LSU was relatively short lived, but the time he did spend there was very impressive. He played in 26 games (14 starts), and had 133 tackles (93 solo).

He also trained with his former Tiger teammate Patrick Peterson and his father leading up to the NFL Combine. Peterson, Mathieu said, was the biggest influence and biggest supporter as he was fighting back from all his personal issues.

Now they get to team up again in Arizona.

“I couldn’t think of a better team to go to,” Mathieu said. “I spent so much time out there with Patrick, it kind of became my second home.”

“To be part of that organization, it’s a blessing,” Mathieu said. “To be with Patrick again, that’s all I ever asked for.”

Arians said Mathieu will most likely start out at weak safety and eventually move over to free safety.

Mathieu was a very good punt returner for the Tigers as well. Arians can see him and Peterson both on special teams returning kicks.

“Who you gonna kick it to?” Arians said. “We can have a lot of fun with that one, because they’re both great athletes, they can throw, we can have all kind of trick plays.”

“We probably have the two most premier punt returners to come out of college football in a long time,” Arians said.

Mathieu was overcome with emotions when speaking to the media on his conference call.

“The whole time, I was telling myself ‘I’m not gonna cry,'” Mathieu said. “I’ve been playing football my whole life, and I know I’m on the right track.”

His past might have scared some teams off, but clearly it didn’t shoo off the Cardinals. Mathieu said the biggest thing the team wanted out of him is to be able to trust him.

“They want to be able to know that I’ve crossed that bridge, and in order to do that, me and the Cardinals are going to agree to a contract,” Mathieu said.

Having that contract comes with certain stipulations that Mathieu is ready to take on.

The “certain things” and “certain places” Mathieu described would most likely be weekly drug tests and meetings with counselors, therapists and sports psychologists.

“It doesn’t matter what they put in my contract, I’m happy they gave me a second chance,” Mathieu said. “It can be anything they put in there, I’m all for it.”

All the media coverage he’s received since his dismissal from LSU, and the immediate attention he’s gotten as the Draft’s gotten closer is “old” to Mathieu.

He says he’s a changed man.

“I’ve changed my entire lifestyle, I’ve changed my way of thinking,” Mathieu said. “I’m just proud of myself, and I’m proud of the people around me that we didn’t let none of that stuff get to us.”

General manager Steve Keim mentioned the word “structure,” when referring to the team. He says having guys like Calais Campbell, Darnell Dockett and Daryl Washington allows him to “occasionally” stretch and take a risk on a player like Mathieu.

“It comes down to one thing: how important is the game to them, and their passion of football,” Keim said. “Tyrann has an extraordinary amount of passion for this game, [and] hopefully that will help him continue to walk that straight and narrow.”

Peterson would seem to be the one with the most to lose, other than the Cardinals on Mathieu, considering how much he and his family extended themselves to help him get back on track.

“I don’t feel at all that my neck is on the line, because I feel that Ty has learned from his mistakes,” Peterson said. “I feel that he’s grown and he’s out of that stage of his life right now.”

“He definitely will not let this opportunity slip away again,” Peterson said.