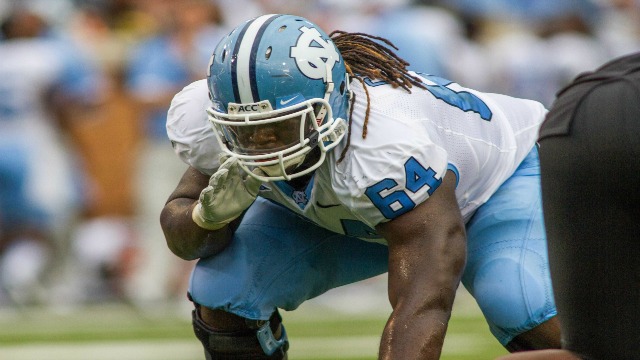 Offensive lineman flew off the board leading up to the Cardinals first pick of the 2013 draft but that didn’t stop them from landing someone they are very excited about. That is offensive guard out of the University of North Carolina, Jonathan Cooper.

“He has raw skill set of athleticism and power,” Cardinals head coach Bruce Arians added. “Most times when you think of athletic guards, you’re thinking of smaller guys out in space, but this guy can really bring it at the point of attack and he’s got feet.”

The 6-3 311 pound was a consensus All-American in 2012 for the Tar Heels and is the first player from that program to do so since Julius Peppers was in 2001. He had the 2nd best bench press of all the offensive lineman with 32 reps and was also in top 10 in 40,standing broad jump & 3-cone drill.

“I mean wow, I’m just so excited to be drafted by these guys,” Cooper said. “I have been out to the area. I know they have a new quarterback and they are looking for him to be the new key. I am trying to be a piece of the foundation as well.”

Keim and Arians think they have someone that can be very good for the Cardinals organization right away next season and also for a long time.

“He brings tremendous versatility,” Keim mentioned. “We truly believe he can be a 10 to 12-year pro…a Pro Bowl-caliber talent. He has unique skill set, maybe one of the most athletic offensive lineman I’ve done in the 15 years I’ve been in the business.”

“I would think that’s a pretty good bet,” said Arians when asked if Cooper will be playing when the season starts.”

When Eric Fisher, Luke Joeckel and Lane Johnson, the three top offensive tackles on many peoples draft reports, went off the board in the first four picks, there was speculation that the Cardinals might trade down in the first round. However, Keim explained that the team had top five players on their list to land at seven and if all were not there, then they might entertain trading down. But Cooper was in that top five.

“I do feel like we deserve to go this high,” said Cooper when asked whether offensive guards or tackles should go that high in the draft. “We put in the work, put in the time and I feel it is shown in our film…I’m really excited to have such an offensive line-heavy draft.”

Keim mentioned that there was one negative to drafting Cooper.

“The hardest part of this selection for me, being an NC State alum, was taking a Tar Heel,” Keim said.

“He made sure to let me know that on the phone when he was telling me I was drafted,” Cooper mentioned. “He said I am going to pick you in spite of being a Tar Heel, so I was grateful.”

-He becomes the first guard taken in the top eight of the NFL Draft since Hall of Famer Mike Munchak was drafted by the Houston Oilers eighth overall in 1982.

-The Cardinals now have selected offensive lineman with four of their last six picks dating back to the 2012 draft. Bobby Massie, Nate Potter and Senio Kelemete were taken last year

The Cardinals are back to work on Friday for round two of the 2013 NFL Draft.