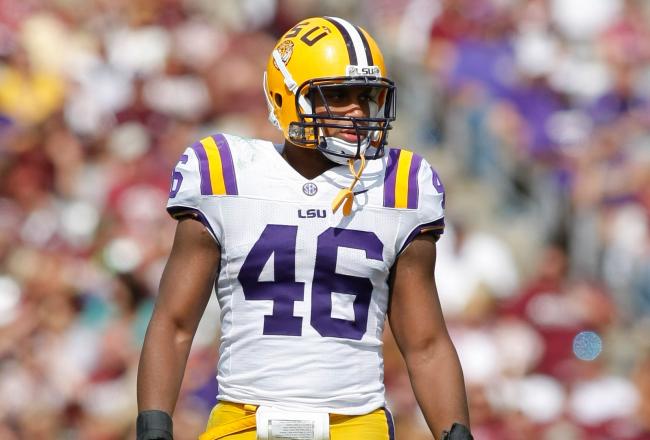 The Arizona Cardinals made a deal with the San Diego Chargers on Day Two of the NFL Draft.

They swapped their 38th pick with San Diego for the Chargers’ 45th pick in the second round, and with that pick Arizona selected inside linebacker Kevin Minter from LSU.

Minter played in 11 games for the Tigers as a freshman, and worked his way up the ladder from there. He had 15 tackles that year.

In his junior – and final – season at LSU, Minter led the team in tackles with 130 (15 of them for loss). He was a Butkus Award finalist, in addition to being an All-American and All-SEC first team selection.

“It’s a dream right here, I just appreciate them [Cardinals] picking me right now, I’m at a loss for words,” Minter said.

Minter said he wasn’t too sure that the Cardinals would select him. His agent told him there was a possibility they would.

“I was just on pins and needles the whole time,” Minter said. “When they called me, I was ecstatic. My whole family went crazy.”

Minter boned up on his Cardinals history a bit. He recognized the Super Bowl run the team made a few years ago.

“Obviously a great organization, I know you were just a couple pieces from getting that now,” Minter said. “I know I’m stepping into a good situation.”

The scouting report on Minter is that he attacks and isn’t afraid to make contact and fight with blockers to get to his man.

Cardinal fans will love this young man based on his description of his playing style alone, which falls in line with what the scouts say about him.

“I’m a physical player, I’m passionate, I’m about business,” Minter said. “I feel like I can be a great asset to this team.”

Every player who’s up to be picked in the NFL Draft thinks he’s worthy of being selected in the first round, but unfortunately for them, 32 young men are taken in that round.

Even though Minter wasn’t one of the select 32, that didn’t dash his dream of playing in the NFL.

“I couldn’t have picked a better organization to be at regardless,” Minter said. “It’s Arizona, I’m in Phoenix, it’s crazy.”

Things weren’t really good at home for the Minter family for a number of reasons that Minter declined to get into. He said the reason he decided to come out after his junior season was primarily family related.

“It’s nice to be able to retire my mother and take care of her,” Minter said. “That pretty much weighed on my decision.”

As excited as Minter is to come to Phoenix, the Cardinals may be even more excited to have him in the fold.

“They said I could be a good fit for this team,” Minter said. “They asked me if I was ready to come down to Arizona and bust some heads and I told them ‘Yes.'”