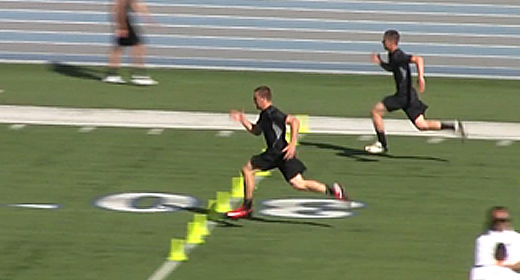 Zack Neill is only 17 years old, but he’s done some impressive things in that short time span.

Neill is coming off a great junior season at Liberty, where at the linebacker position, he had a team-high 151 tackles, which placed him among the top five tacklers in the state.

Even more impressive than that is the fact that Neill has been team captain since his freshman year, and isn’t looking to relinquish that title anytime soon.

“When I do something, I’m not just gonna do it just to do it, I’m gonna do it to the best of my abilities,” Neill said of his work ethic, which he said impressed the coaches enough for them to give him the title of captain.

Speaking of “best of his abilities,” Neill recently attended the Nike SPARQ Combine in Los Angeles. There were nearly 1,600 kids who participated in the event, and out of all those athletes, guess who had the highest rating of them all? Neill of course. He had a 108.3, which is extremely impressive considering the talent he was up against.

Neill and the rest of the athletes had to run a 40-yard dash, a 5-10-5 shuttle, a medicine ball toss from their knees and a vertical jump. The kids had two attempts at each event.

Neill wasn’t ashamed to admit that he was a little nervous going into the combine.

Having 151 tackles in a season, you would think means that Neill loves contact and hitting people. You’d be correct in that assumption. He loves to hit!

“Like me, he loved to hit,” Neill said. “He was always making big plays back from the safety position, knocking people out.”

In his freshman and sophomore seasons, Neill was more of an all-purpose athlete for the Lions. He played running back, he punted, he ran back kickoffs. You name it, Neill did it.

He says it was a bit of a tough transition, moving to the defensive side on a full-time basis, because he was used to being that all-purpose guy.

“At first I was kind of skeptical about it, but at the end, I’m pretty excited about it and I was really able to show my talents with that,” Neill said.

As far as Neill’s future goes, he and his parents haven’t been on any official visits to colleges yet, but he’s looking to make some trips this summer and they’ve already been on the e-mail circuit with some schools.

Academics, to Neill, are just as important, if not more to him than athletics. He knows that a good education will take him much further in life than a career in football would.

“I take my academics really seriously,” Neill said. “Once football’s over, I’m gonna have to lean on my academics to get me through life.”

“I think it’s gonna be awesome to step up my level on the field and off the field in the classroom.”

Oddly enough, with all the talent that Neill has on display at Liberty, neither Arizona State nor Arizona have shown any interest in him. His parents told me that NAU sent him an introductory packet, but nothing much more than that.

Neill says he has a lot to offer a next-level school.

“I’m a good leader on the team and I know what I’m doing, so if I see kids messing things up, I’m able to coach them,” Neill said. “Since I’m an athlete as well, they’ll listen to me sometimes and I can explain things better to them than sometimes coaches can.”

Neill believes there’s always room for improvement. Fortunately for him, playing under head coach Dan Filleman has helped him grow a lot in three years.

“There’s been a lot of growth,” Neill said. “It’s just awesome seeing all these kids come in, and we started as freshman. To see my growth and everybody’s growth here, he [Filleman] seems to be doing a good job here.”

Neill already has specific goals in mind for his final year with the Lions.

“I’d love to set the bar high for the underclassmen here and let them be able to look up to me and be like, ‘Yea, he was a good athlete,'” Neill said. “I’m gonna go off to college somewhere good and let them know that, through the coaches here, [I] can leave a legend behind.”