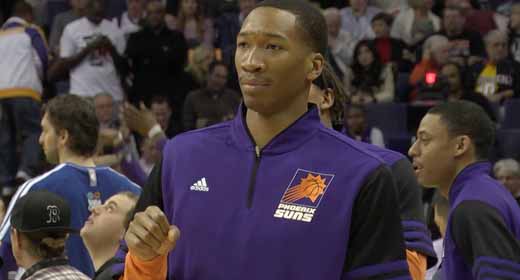 Suns faithful are not used to a rebuilding season. During the bumps and bruises that the team needs to endure in the process it is important for the team to evaluate their young talent and see if they fit the future solution.

Wes Johnson’s first season with the Suns for most of the season to this point has been head scratching. He has not played in 31 of the Suns first 60 games this season. But over the seven Suns games, Wes Johnson has played more than 20 minutes in five of them. And in those five games, he is averaging 11.6 points and eight three-pointers made. Also contributing to the team’s much improved defense.

“Even his practices have been outstanding,” added Suns head coach Lindsey Hunter. “I think everybody has been watching this kid and you can see how he has just come alive. Offensively, defensively and in practice he’s been on another level and it’s great to see.”

When joining a new team with the hopes of starting fresh and earning more playing time, the year hasn’t gone as planned. It could have been easy for Johnson to voice frustration or lose focus. It has been a hurdle for him to get through but it has not how he has handled himself.

“Just trying to stay ready,” mentioned Johnson. “Stay in the gym and do something I can control. I can at least control me working out and staying in shape. I really couldn’t control what else was going on. Staying positive and staying a good teammate for the team and really just trying to do whatever I can do on the sideline.”

As the Suns continue to grind through the season, the biggest questions are who will be the best fit of their young players to continue with past this season. Wes Johnson will be an unrestricted free agent at the end of the season. Whether not he will be back with the Suns as part of the future solution remains to be seen. But his play over the last week could be a good answer to that question.