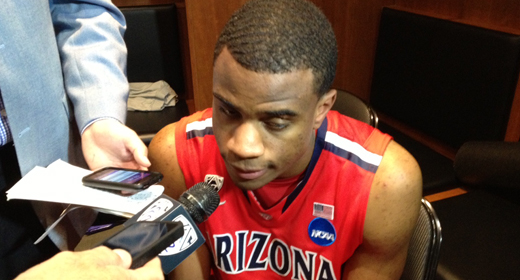 Thursday night at Staples Center in Los Angeles the Arizona Wildcats found that out the hard way when Ohio State’s LaQuinton Ross nailed a deep three with just two seconds left to give the second-seeded Buckeyes a dramatic 73-70 win in the first West Region Sweet 16 game.

“We had a game plan to switch [the play] and it’s easier said than done,” Arizona head coach Sean Miller said after the game. “[Ross] is out there with some really skilled and good players. His 17 points…in my mind, stand out in the difference of a great game, a real hard-fought game.”

Things started well for Arizona (27-8) who raced out to a quick 8-2 lead at the first media timeout after Solomon Hill hit a shot in the lane and was fouled. The Buckeyes got four early points from forward Deshaun Thomas, but struggled from the field hitting only two of their first eight shots.

OSU (29-7) responded to cut the lead to one 12-11 forcing a Miller timeout after five Sam Thompson points sandwiched around an Aaron Craft layup.

The good news for UofA in the first half was the play of senior guard Mark Lyons who beat his defender off the dribble at will in. His and-one gave the ‘Cats a 22-15 lead as the teams traded baskets. Craft went to the bench with his second foul after Nick Johnson darted into the lane. A Kevin Parrom steal and Johnson dunk pushed the lead to 26-17 and forced Thad Matta to call timeout.

Ohio State wouldn’t quit and lot the UofA lead to 36-30 at the under four minute timeout after Craft returned to the court with two fouls and clearly sparked the Buckeyes morale.

The Buckeyes stormed out of the locker room going on a 6-0 run to retake the lead 40-38 and forcing Miller to quickly call timeout. The Cats first few possessions were poor with Parrom, Lyons and Hill missing long three-pointers.

Things didn’t get much better after that as OSU pushed the lead to six as the ‘Cats near five-minute scoring drought continued. Ashley finally broke the scoring drought nailing a baseline jumper off Hill’s assist, but the Bucks responded again going up 50-42 and forcing Miller to use his third timeout with over 11 minutes to play.

“We really were on our heels through I would guess maybe the first ten minutes of the second half,” Miller said. “The fact that I called as many timeouts as I did, I felt like our team was reeling.”

The Cats refused to back down behind Hill who followed a three-point play with a nice fadeaway jumper and then a finger roll in the paint to pull UofA within four 56-52 at the under eight-minute media timeout.

UofA would eventually tie the game on Lyons’ three-point play at 70 setting the stage for Ross’ dramatics in the closing seconds.

“I’ve got no regrets,” Lyons said after scoring a game-high 23 points. “I played with a great bunch of guys this whole year who had a lot of faith in me. I’m just happy they accepted me to come into their program and try to help them win.

Hill was the only other Wildcat in double figures with 16. Ohio State was balanced with four players scoring 10 or more.