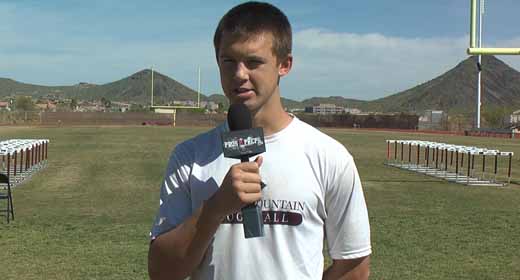 Kyle Allen has seemingly gotten better and better as his career at Desert Mountain has went on.

Last season, Allen led all Division I quarterbacks in passing yards (3,119), passing percentage (72.1) and QB rating (138). He also threw for a career high 36 touchdowns against just seven interceptions, leading the Wolves to a 9-3 record.

For all the hard work Allen has put into his craft, he was recently given top-rank status among all high school quarterbacks in the country, according to scout.com.

Allen says he first found out from Pros2Preps.com high school insider Jason Jewell after he came back from one of his camps.

“It’s just a weird feeling,” Allen said when speaking of his No. 1 status. “It’s weird being on top. I worked so hard for it for so long, [and] to be here it really tops off all my work, but I’m not done working. I still have to stay up there.”

Allen is quick to use the word “team,” instead of the word “me” when talking about all the success he’s had so far at Desert Mountain.

He knows where his bread is buttered.

“Oh definitely, [it’s] the team work out here,” Allen said. “Coach [Tony Tabor] helps me, he comes out here and pushes us every day.”

“I gotta do outside stuff too, and all the players work hard and work countless hours at this.”

“I’ve always wanted to be a national level recruit, so I wanted to work hard and get on that,” Allen said.

The road to No. 1 – and staying at No. 1 – isn’t an easy one to travel and stay straight on. Allen wisely sought advice from Patriots quarterback Mike Kafka.

Kafka was in the same boat that Allen is currently in right now when he was on the back end of his high school career. Kafka had an endless string of college offers, but picked Northwestern as his final destination.

Kafka broke it down to Allen straight and plain.

Allen and his parents have some work on their hands as far as finding that right fit. Right now, Allen has 14 schools that are wanting him in their program, including Arizona State and the University of Arizona.

Allen said he got a chance to visit Coach Todd Graham and the Sun Devils this past Sunday at one of their spring practices, and he was very impressed by what he witnessed.

“It’s an awesome program,” Allen said. “It’s the first time I’ve ever seen a college practice live before. It was an amazing experience.”

“It’s really gonna be a step up at the next level for sure,” Allen said. “I mean, they’re going crazy over there, but it’s a really organized, really well disciplined organization over there.”

Allen equally gushed over the Wildcats as well. Just recently, he went to Tucson, Ariz., to take part in their Junior Day, and he had a very good experience there as well.

“I’m interested in them, they run a good program down there,” Allen said. “Coach [Rich] Rodriguez is an awesome guy, I talked to him for a long time.”

Allen is unsure of what he wants to major in once he gets on a campus, but he has it narrowed down to three choices: engineering, business and broadcasting.

Just talking with him, it seems like engineering would be his first choice. He told me that math comes so easy to him.

“Math has become an easy thing,” Allen said. “A lot of the homework, I do it pretty easily, and tests I really don’t study for and I still do well.”

For anyone looking at Allen as a role model type person (even at his young age), he says it’s not as glamorous as it may seem having all the stats and accolades he has.

Nothing’s been handed to him on a silver platter, that’s for sure.

“It’s about hard work and perseverance,” Allen said. “You gotta work your hardest. There’s no days off in this life, we’re working hard every day.”