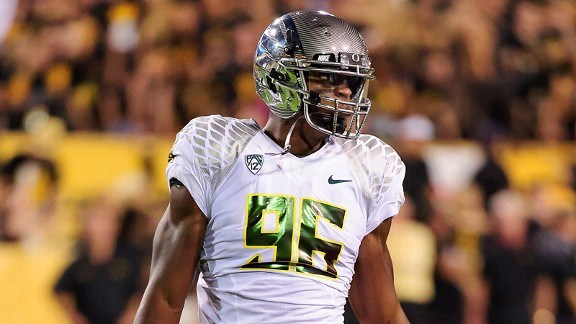 Dion Jordan has never run from the pressure or his fears.

Whether battling second and third degree burns to 40% of him body from a near tragic gas explosion as a teenager or performing at the highest level in front of hundreds of watchful NFL eyes at the Combine last month in Indianapolis, Jordan’s laser focus has laid a foundation for success on and off the football field.

“It was a bump in the road,” Jordan told Brad Cesmat when describing the accident Thursday on ‘Big Guy on Sports.’ “It was a process. I had to learn from the mistake that I made and I had to overcome it. It’s a blessing I’m able to play football…from the mistake I made when I was 18 years old.”

Next month the former Oregon Duck star defensive end will feel even more blessed when he hears his name called early in the first round of the NFL draft.

After running a 4.60 40-yard dash at the Combine the 6’6, 250-pounder wowed scouts he dashed through the 20-yard shuttle at 4.35 seconds and broad jumped 122.0 inches which also was near the top for defensive linemen. Many draft “experts” believe the former Chandler High star wide receiver/tight end is a lock top 10 pick and could sneak into the top five depending on how the draft plays out.

Even after his jaw-dropping numbers in Indianapolis Jordan is convinced he can improve, specifically in the 40-yard dash.

“I think I can do better,” Jordan explained to Cesmat. “After watching [the Combine] over and over back on TV I can most definitely improve that. It was something we (the players) can only experience one time…a lot of guys [felt] like they could have done better and most guys will do better in the next few weeks leading up to their pro days.”

The prospect of Jordan improving his blazing time has NFL personnel drooling, including his former Ducks coach Chip Kelly who took over for Andy Reid in Philadelphia with the Eagles after leading Oregon to a Fiesta Bowl win over Kansas State. The Eagles hold the fourth overall pick after their disappointing 4-12 season.

Jordan is currently in Los Angeles rehabbing his shoulder after having surgery just hours after the Combine on a torn labrum which will sideline him three to four months. It will preclude him from rookie camps and organized team activities.

“I’m trying to keep my body healthy,” he said. “That’s the most important thing. I want to be ready for whenever my name is called.”

He registered 44 total tackles,10.5 for loss last season. He also had five sacks.