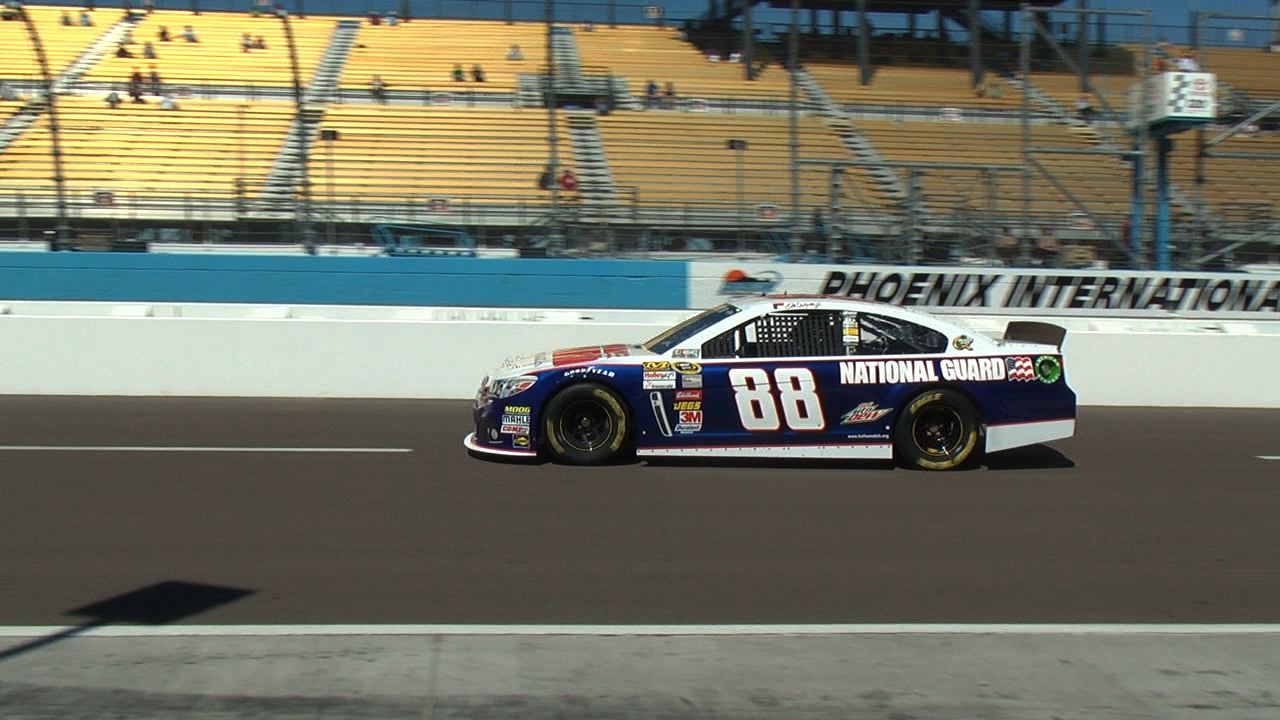 NASCAR is full of big names. Two of the biggest – Danica Patrick and Dale Earnhardt Jr. – will be taking part in the Subway Fresh Fit 500 on Sunday at PIR.

Earnhardt Jr. says as far as nuts and bolts go, he and his race team really haven’t done much to change his car.

“The body on the car is quite different,” Earnhardt Jr. said. “I’m hoping the tires [are] the big change, because I haven’t ran good here since they re-paved the place, and I’m hoping changing the tire might be a move in a good direction just for me personally.”

Earnhardt Jr. thinks the track should age pretty quickly being that it’s out in the desert, which should serve him well over time.

“When you put down a new surface, it’s pretty single file for a couple years,” Earnhardt Jr. said. “At least about three or four races before we start really moving up the racetrack, and changing lanes and running different grooves.”

Patrick was the first woman to win a Sprint Cup pole and lead the Daytona 500. Patrick would eventually finish eighth last Sunday.

Patrick says this weekend’s race is where the bulk of the season really kicks off for them. She says her and her team have calmed on their expectations for the 500.

“Is qualifying on the pole and leading laps what we should be thinking happens, based on last weekend?” Patrick asked. “I need to keep realistic expectations, and I think everybody else does too.”

Patrick has had her fair share of struggles like Earnhardt Jr. has had here in Avondale, Ariz., over the years.

“Phoenix was one of those places that, man, even [in] the Nationwide car, I just couldn’t get the hang of it,” Patrick said. “I came here many times and continued to kinda suck.”

Last November was a breakout time for Patrick here, as she finished 17th at the Phoenix AdvoCare 500. Not bad considering she started 37th in the race.

“It was a good weekend, the best weekend I’d had in a Cup car,” Patrick said.

Tony Stewart, Patrick and their teams put their collective heads together after the Daytona 500 and started looking ahead toward this weekend’s race. She said they were all on the same wavelength as far as how to tackle PIR.

“We really just wanna be better in qualifying,” Patrick said. “That’s my personal goal for the weekend is to be able to improve from last year in the qualifying and having a better run and feel good about it.”

Being able to handle a new track like PIR’s gets easier if you can master it in different vehicles – like a Nationwide car and a Cup car.

Earnhardt Jr. says there’s no real benefit to running two cars on a track that he already knows well, like Daytona’s or Talladega’s, other than “doing it for fun.”

“When you come to a technical racetrack, the surface is new, the tire’s new, everybody’s still trying to find out a few secrets and gain some information on the competition, it’s a great opportunity,” Earnhardt Jr. said.

“It’s about trying to get those points, they’re so important.”