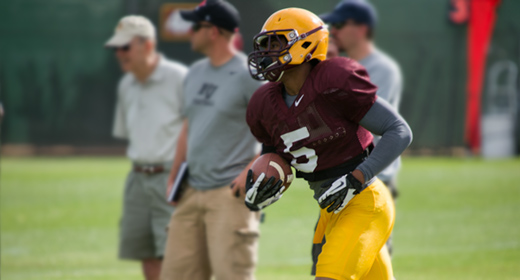 The Sun Devils had a powerful backfield trio last season in Cameron Marshall, Marion Grice, and D.J. Foster. With the help of these three, Arizona State averaged 205.4 yards rushing per game and had 27 touchdowns on the ground.

The team lost Marshall to graduation, so in order for the running game to continue to flourish under offensive coordinator Mike Norvell, someone has to step their game up to compliment what Grice and Foster are going to do this year.

Deantre Lewis is shaping up to be that guy.

Lewis had a solid freshman year, amassing almost 1,000 all-purpose yards in his 11 games. He was able to average almost six yards per carry that season.

Unfortunately for him and the Sun Devils, his sophomore season was ripped away from him when he became a victim in a random shooting that occurred right before the start of the 2011 season.

He soon recovered from his injuries and returned in 2012, but in a new form. Then first-year head coach Todd Graham moved Lewis to defensive back, due to the need for healthy bodies in the secondary.

It wasn’t the best of experiments, as Lewis struggled to get the feel for the secondary. Graham admitted that Lewis seemed “confused” and he “hit a wall” at the position, so he decided to move Lewis back to his natural position at tailback, which is something Lewis is excited to get back to.

“Everything’s going good, learning the offense again,” Lewis said. “It’s coming back pretty easy because I learned it in the fall camp and spring last year.”

“It’s very good transitioning back to running back, where I think I belong.”

The last time Lewis played in any sort of secondary was his sophomore year in high school. He explains why things didn’t go so well for him last season on defense. “I used to be good at both [offense and defense], but when you take years off you kind of lose the fundamentals of defense and how to read plays,” Lewis said.

Even though it didn’t work out well for Lewis last season, you have to give him credit for making himself available to Coach Graham in whatever capacity he needed him.

Lewis can see the potential in the Sun Devil running game, if it’s even half as effective as it was last season, based on how multi-faceted the position is. “Marion Grice, he can be both [speed and power runner],” Lewis said. “He’s about 205-210, [and] he’s a good runner and he’s very smooth with his running.”

“I can do both,” Lewis said. “I can sometimes be power depending on my mood.”

Arizona State made some good in-roads in their first season under Coach Graham. Lewis has loftier goals for he and his team this year. “Being on top of our conference and getting a shot at the Rose Bowl,” Lewis said. “We believe we have the team to do it, all we have to do is work hard.”

“There’s games last year we lost because of mental mistakes, just because we weren’t thinking when we were tired,” Lewis said. “I feel like this is gonna be a great year for us.”