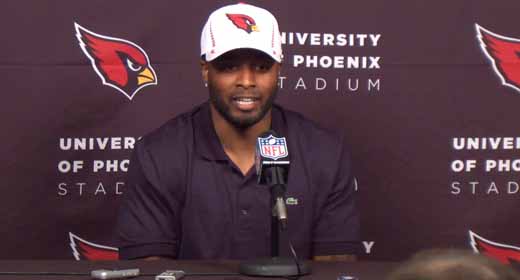 The Cardinals have lost a lot of pieces in their secondary, but on Wednesday they started the rebuild.

With Powers and Bell in house, that makes five signings on Wednesday by Arizona, including quarterback Drew Stanton, running back Rashard Mendenhall and linebacker Lorenzo Alexander.

Powers comes from where else? Indianapolis, where he spent the past four seasons. He started all 42 regular season games he played in with the Colts, and had 220 tackles (165 solo), six interceptions, 33 passes defensed, one forced fumble and one fumble recovery.

“Jerraud turned our season around last year with an interception to open the second half at Green Bay and that’s the kind of impact player he is,” head coach Bruce Arians said. “He’s a tough, physical defender who’s also one of the smartest players I’ve been around.”

Powers told Arians that he had a scheduled meeting with the Chargers following their meeting, but Powers said that Arians wouldn’t let him leave the building without a “red pen” in his hand, signifying Powers agreeing to a deal with the team.

“That’s just the type of guy BA is,” Powers said. “He’s gonna try to do whatever it takes to make this team better and make the right decisions.”

“He definitely got me since last night and today,” Powers said.

Powers thinks the Cardinals 5-11 record last season wasn’t indicative of how good the defense really was.

“BA’s gonna make sure that’s (the defense) intact,” Powers said. “I think this defense can be better than it was last year, even though I thought the defense was pretty darn good last year.”

Bell started all 16 games last season for the Jets and finished third on the team in tackles with 103 (83 solo). Bell also had three fumble recoveries, one sack and four passes defensed. It was Bell’s fifth straight season with over 100 tackles.

Bell has been a starter for the past five seasons, which should bode well for the Cardinals, considering they let their former two starters at safety, Adrian Wilson and Kerry Rhodes go.

“Yeremiah is the kind of guy you love to have on your football team,” Arians said. “He’s a guy with experience as a starter who has been very productive.”

“Team-wise, he’s exactly the type of player you want in your locker room – a football junkie who loves the game.”