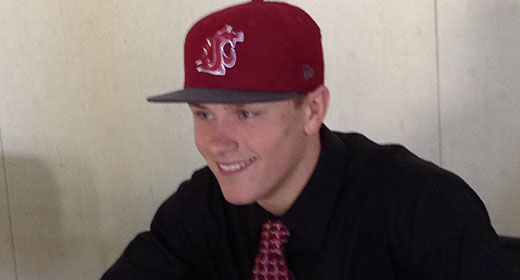 News came down early Wednesday morning that quarterback out of Georgia Joshua Dobbs signed to play with Tennessee, de-committing from Arizona State and leaving them without a quarterback in this 2013 class.

As a result, ASU’s offensive coordinator Mike Norvell contacted arguably one of Arizona’s top quarterbacks, Washington State commit Tyler Bruggman. The Brophy quarterback loved what he heard from the Sun Devils and did not sign his letter until he arrived at Brophy Prep at 12:30. He arrived at his school with a Cougars hat in hand and ultimately signed with Washington State.

“I went back and forth this morning like I did seven months ago,” Bruggman said on Wednesday. “I had a very stressful morning and night yesterday so it really just came down to a gut decision.”

ASU was one of Bruggman’s final choices originally before he made his initial commitment seven months ago. He got to know the staff at ASU over the fall and winter and when they came back at the last minute, he thought hard about what they had to offer.

“They are just great people over there. Coach Norvell is a fantastic coach,” explained Bruggman. “Seeing their offensive production this year in just their first year is great…There are a lot of great people at ASU that stand for the right thing.”

You see a lot of players flip from their verbal commitment on signing day and Bruggman was close to being one of those guys, but decided that Cougar pledge was and will continue to be his future.

“I’m a man of my word and I wanted that commitment to mean something,” Bruggman mentioned.

“It’s a shame that I had to pick one over the other because they are both great places,” added Bruggman. “I really see myself at both places which is what made this decision so hard.”