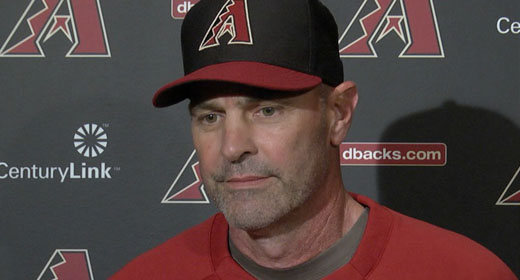 Spring training is underway as pitchers and catchers reported out at Salt River Fields at Talking Stick for the Arizona Diamondbacks officially beginning the 2013 season. It was an off-season of change for the organization, dealing some of the teams most recognizable faces.

Few would dispute that the face of the franchise was outfielder Justin Upton. The right field bleachers at Chase Field was named after him and was by far and away the most recognizable player on the roster.

But now he is a member of the Atlanta Braves. So that means a new player or players step in to fill that role. Manager Kirk Gibson has an idea of who.

“It’s us,” said Gibson on Monday. “I just see it as us. I mean just look at the team the way it is. I think it’s what stands out and what will become evident the way we play. I’t not one person.”

“The only face on the team is the face we have on the jerseys, the Diamondbacks,” catcher Miguel Montero added. “If we all together are one leader together, we all are going to be good.”

So who will this us be made up of?

This team undoubtedly see’s its strength in numbers when it comes to it’s pitching staff which reported today. A starting rotation of Ian Kennedy who has pitched over 200 innings for the team for two consecutive seasons, Trevor Cahill, newly acquired Brandon McCarthy, and either Tyler Skaggs, Patrick Corbin or newly acquired Randall Delgado from the Upton deal.

Plus the bullpen which brings back J.J. Putz, David Hernandez, Brad Ziegler and adds Heath Bell. All of which have MLB closing experience.

The team might have one of the more complete infields in the National league going left to right: Martin Prado, Cliff Pennington/Willie Bloomquist/Didi Greigorious, Aaron Hill and Paul Goldschmidt. Adding in a scrappy outfield of Cody Ross, Jason Kubel, Gerrardo Parra and Adam Eaton.

All as individual may not have the make-up as a franchise player. But all pieced together make up the entire puzzle that make up the team’s identity.

“You put it on somebody and they feel it, then all of a sudden they get off to a slow start or things don’t go good and they are not carrying, the pressure comes on,” explained Gibson. “We will make sure we spread the responsibility around this year.”

The pitchers and catchers will participate in their first official workouts on Tuesday. Position players officially report on Thursday.

One big note that was newsworthy that came from Monday was starting pitcher Daniel Hudson, who underwent Tommy John surgery last July, was out throwing at Salt River Fields Monday. Kirk Gibson stated that he could be ready to throw off of a mound in a couple weeks. Hudson isn’t expected to return until around the All-Star break at the earliest.