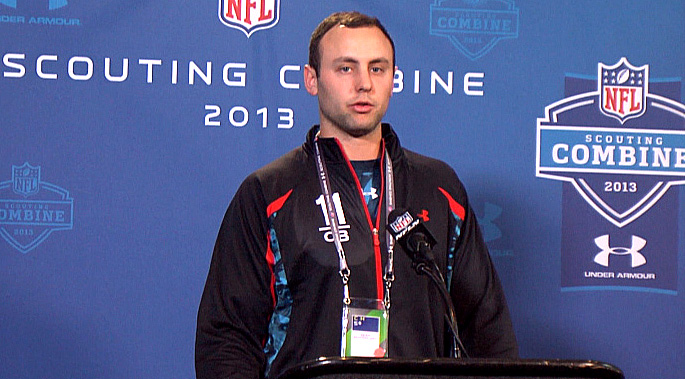 In an NFL Draft that’s viewed as having less than stellar quarterbacks, former Notre Dame Prep star Sean Renfree has a chance to step up and make a name for himself.

He’d go on to have four solid years in Durham, N.C. as well.

Renfree became the starter for the Blue Devils as a sophomore and earned MVP honors that season. In his senior season, Renfree completed nearly 70-percent of his passes for 3,113 yards. He threw 19 touchdowns, while only throwing 10 interceptions.

Unfortunately for Renfree, he suffered a serious injury late in the Belk Bowl, an injury which required him to undergo surgery on his torn right pectoralis muscle. The injury is preventing him from taking part in any of the physical activities at the NFL Combine.

“The first two months, I really couldn’t do anything,” Renfree said.

Renfree said he was in a sling for a month. Once he got rid of the sling, he was able to get his range of motion back and begin to strengthen his shoulder.

The timetable for Renfree to be able to throw in front of teams, he says, is sometime in April. He says he’ll return to Arizona to continue his rehab before setting a date for his pro workout.

Being under such a man like David Cutcliffe – who coached both Peyton and Eli Manning – at Duke, Renfree says, was a dream come true.

“When you can ask somebody like that questions, that can relate as a player, that’s huge,” Renfree said. “Somebody who can answer little questions here and there, and also as a role model.”

General managers, head coaches, and scouts are here in Indianapolis to find young men who they can add to their franchise and be proud of the fact that they got the right guy(s) moving forward.

Renfree says he won’t blow the opportunity that’s about to be given to him.

“When I come in, I’m not gonna screw or do anything, I’m gonna be a good leader,” Renfree said. “I can come in and learn an offense quick, and I don’t need a whole lot of snaps to do that either.”

“If you gave me one sleeper quarterback, [an] under the radar guy, he would be it,” McShay said. “He’s got the size, [he] doesn’t move all that well, but he knows how to handle pressure.”

McShay thinks Renfree will surprise a lot of people, just by where he’s taken in the draft.

“I think you’re gonna see him probably come off the board a little bit earlier than anyone expects,” McShay said. “Fourth may be a stretch, but fifth round wouldn’t shock me at all.”