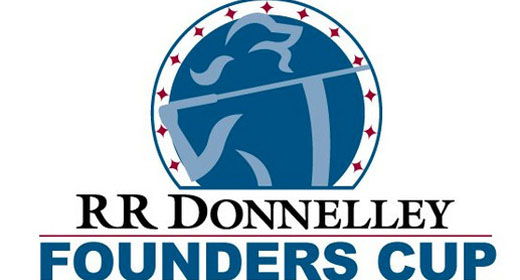 How often does one get the opportunity to hit golf balls off of a roof on a green? Well Amanda Blumenherst, Paige MacKenzie and Wendy Ward of the LPGA tour have played more than their share of golf in their lives and they haven’t had the chance.

On Thursday, the RR Donnelley Founders Cup held it’s media and had a closest-to-the-pin contest off one of the roofs of the JW Marriott in Phoenix hitting at the 18th green of Wildfire Golf clubs. Members of the media had the opportunity to compete against the LPGA players to compete for prizes.

“This is nothing in my imagination that I saw myself doing while I was playing golf,” said LPGA tour player who makes her home in Scottsdale, Paige MacKenzie. “It’s just to get the word out and hopefully create some buzz around the LPGA event out here at Desert Ridge.”

“I have definitely never hit a golf ball off a roof,” added LPGA tour player and Scottsdale native Amanda Blumenherst. “This is definitely a first for me. It’s been amazing.”

The RR Donnelley Founders Cup will be played for the third consecutive year at the Wildfire Golf Course at the JW Marriott Desert Ridge in Phoenix from March 12-17. The event features a $1.5 purse, with $225,000 going to the winner. The tournament was originally established to honor the 13 founders of the LPGA Tour aiming to raise money and awareness to provide a future for the LPGA-USGA Girls Golf Program. The tournament proceeds has raised over $1 million to that program in the last two years.