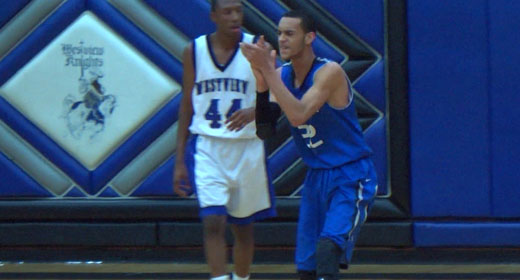 Ryan Richardson is one-third of a great trio of basketball players at Dobson High School. The other two being fellow guards Kodi Justice and Jaron Hopkins.

With two other upperclassmen with just as much talent as Richardson, you’d think he’d have to fight to get his numbers, but he doesn’t. The Mustangs make it work and it works well.

Richardson is second on the team in scoring behind Hopkins. He’s hitting 55-percent of his shots, including 48-percent from three-point range.

Richardson has seen his overall game evolve since his freshman year. A year in which he said was very limited.

“In my freshman year, I just stood in the corner really, I’m not even gonna lie,” Richardson said. “I stood right in the corner and just shot, and now I try and do a little bit more.”

The defensive part of his game is where Richardson has seen the most progress.

“I’ve really worked hard on my defense,” Richardson said. “So now that way, I know if I stop the other team’s best player, then we have a very good chance to win.”

Who or what motivated Richardson to tighten up defensively? His brother.

“My brother would always be mad at me for not wanting to play defense, so I guess he really pushed me the hardest to improve on my defense,” Richardson said. “Of course colleges would tell me I needed to improve my defense, so that’s what I wanted to work on.”

Evidently all that work has paid off for Richardson, because colleges are starting to take stock in him.

Grand Canyon and Weber State have already offered him scholarships, and Arizona State has also shown some interest.

Richardson thinks the Sun Devils’ level of interest hinges on how he and Justice do next year in their senior season. Justice has already said yes to head coach Herb Sendek.

Richardson and Lopes head coach Russ Pennell have a history that dates back to Richardson’s freshman year at Dobson.

“He’s [Pennell] a really good guy and I like him a lot,” Richardson said. “They have an excellent program over there, and it’s close to home so that’s something big.”

Richardson is a leader right now at the high school level. In a matter of time, he’ll be fighting his way back to the top of the food chain at whatever school he decides on.

Richardson is good with that. He says he’s been dealing with opposition on the basketball court his entire life, so this won’t be anything new to him.

“Ever since I was a little kid, almost every team I played on, they’d try to keep me on the bench,” Richardson said. “I took that to heart, [and] it hurt, [and] I never wanted to feel that pain again, so I always wanted to strive to be better. I guess that kinda pushed me, it just lit a fire.”