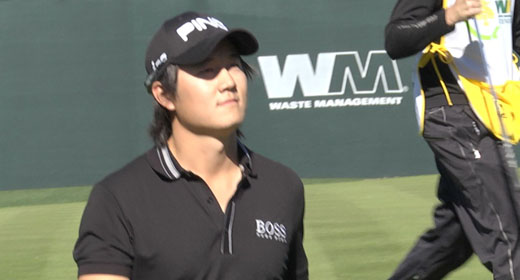 After the news came down that 2003 Waste Management Phoenix Open champion Vejay Singh had backed out this year after news of the deer antler spray usage, there needed to be a late addition. That addition was a local product, former Hamilton Husky Richard H. Lee.

Lee is new to the PGA Tour after spending some years on the Nationwide Tour. The Chandler product played collegiately at the University of Washington and so far in 2013, has played in three tournaments (the Phoenix Open being the fourth) and already has one top ten finish.

Even though the news of going from being an alternate to a participant came late, he could not be more excited to play in his home town.

“I haven’t played in the Waste Management before and this year, I wanted to play it really bad,” said Richard H. Lee after finishing up round two Friday. “When I got that call I thought what an opportunity, I can finally play here.”

Along with it being Lee’s first opportunity to play in the Open, it was his first chance to experience the famous 16th hole as a player and not as a fan. He knew what to expect but still had trouble finding the words to describe it as a player.

“I have been a crowd here before so I know how crazy it is,” mentioned Lee. “There is just so much excitement on 16. It’s tough to describe what you really go through but the anticipation, once you walk in it’s a stadium vibe and I was lucky to birdie that hole today.”

“Someone yelled out my high school mascot and I thought to myself, how do people know this stuff?” Lee joked. “It’s just a lot of fun.”

That birdie at 16 on Friday was one of four consecutive birdie’s Lee had on the back nine. Because of that stretch, Lee put himself in position to make the cut and continue the opportunity to play in front of family and friends. Standing six under par after two rounds.

“I got off to a tough start (Friday), I double bogeyed the first hole but I just kept telling myself hang in there because you never know when it’s going to start,” explained Lee. “Then in the back nine it started to pour in. So I’ll be around for the weekend and get to experience 16 a couple more times.”

After finishing his second round, Lee stood in a tie for 28th place and still has ground to make up to be among the leaders. But Lee seems to just be happy to have the opportunity to continue to play in the tournament who grew up attending as a kid.