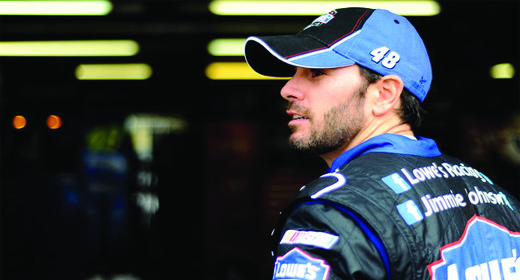 Jimmie Johnson has won four times in his career at Phoenix International Raceway. He’ll be looking to up that to six this weekend, as Johnson will take part in both the NASCAR Nationwide Series 200 on Saturday and the Subway Fresh Fit 500 on Sunday.

Johnson says he’s running on Saturday in order to get more “reps and more laps.”

“The racing’s getting awfully exciting at PIR,” Johnson said. “We’re learning this new racetrack. I think this track [is] seasoning now and coming to us.”

Johnson loved the old surface of PIR. That’s obvious considering the four wins he took on it. He feels like he doesn’t have a “competitive advantage” on the new surface quite yet.

“That’s frankly why I’m running the Nationwide Series race on Saturday, just to get more reps [and] try and figure the racetrack out,” Johnson said.

Johnson has family in the area, plus he grew up in El Cajon, Calif., so racing in Avondale, Ariz., and being relatively close to home, is a win-win for him, especially if he wins both races this weekend.

Winning a major race like the Daytona 500 has its advantages and disadvantages.

For Johnson, he has been on a media tour ever since winning the race, which has worn him out (the disadvantage I spoke of earlier).

“I’m so exhausted,” Johnson said. “I’ve been everywhere, doing so many cool things, but it’s time to get some sleep, time to rehydrate.”

Being on such a whirlwind this week has detached Johnson from his race team, and that’s something he’s not too pleased about.

“Tomorrow will be a big day, just get caught up and understand what’s going on,” Johnson said. “We gotta make sure I know what’s going on setup wise and get my head in the game.”