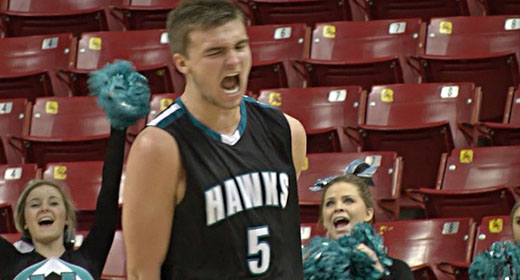 The Highland Hawks basketball team is doing whatever they can to get themselves in position for the Arizona state tournament that will be set to kick off this week. It is a Hawks team that is led by a young crew of juniors that has learned and grown over the course of the season.

One junior in particular who is putting his team on his back this season is forward Jake Toolson and his 18.5 points per game.

“Over the summer I put in a lot of work working on my craft, working on my game and I have been playing a different role this year. Kind of as a leader,” said Toolson. “Lots of pressure on me to get this team going because we don’t have much experience but we have guys who play hard.”

“It starts with me,” Toolson added. “That’s just what I want. I want to win every game.”

What makes Toolson the great scorer he is, is his ability to score from everywhere on the floor. He can beat you from the outside, off the dribble on fast break and in the post. Highland looks to him in all those facets which makes him extremely valuable to the Hawks’ success.

“That’s what I love about my game,” mentioned Toolson. “I think I am very versatile. I can hit you on the outside or beat you on the inside…I don’t really have a preference but I think in college I am going to play the two (shooting guard).”

College will be the next step for Toolson. He currently has reported offers from Arizona State, Utah State and Boston College. Former Sun Devil James Harden is one of his favorite players to watch. While playing at the next level and improving his game to be ready is the ultimate goal in the future, winning in the present is the top priority.

Highland is right on the bubble as the are working toward a playoff appearance this season. If they do make it in, they could be a team that could easily catch fire and upset some teams in the tournament.