The Wildcats did something that they haven’t done since 2006. Sweep the Washington schools. For the first time in the Sean Miller, Solomon Hill and Kevin Parrom era’s, the Cats won in Seattle against the Huskies. The game itself was not pretty but they will most definitely take the win. Arizona is really struggling getting into an offense in three of the last four games. The team as a whole is not shooting the ball as well from the outside and because of the inconsistency of scoring in the post, the offense as a whole is struggling. But that hasn’t stopped them from winning three of those last four. With Oregon’s two losses, the Wildcats are now back at the top of the conference in a tie with the Ducks.

Last week Wildcats MVP: Kaleb Tarczewski. Was huge in the Washington game, especially in the first half for the Cats and put out another solid effort against Washington State.

They now look ahead to an important week against two dangerous teams. Stanford and California are both coming off great weekends sweeping the Oregon schools. Both are always tough to beat at home but on the road is another story. Three of Stanford’s four conference losses are on the road and two of Cal’s three losses are on away from Berkley. Defending the three has been a thorn in the Wildcats side all season and both teams have guy that can really shoot the ball in Dwight Powell for the Cardinal and Allen Crabbe for the Bears. Both are games the Cats should win before heading back out to the road in what will be a tough game at Colorado who will be looking for redemption.

A quick side note. Those wins over Florida and Miami are looking amazing right now as both are atop their conferences and ranked in the top ten in the nation.

Even though ASU did not win both games, if you didn’t think ASU was for real before the Washington trip, you absolutely have to now. In my opinion, the Washington trip and Northern California trip is consistently the toughest road trips to make every year. The Devils started slow against the Cougars but got it together and played two very very solid games. Jahii Carson’s 32 points on 13 of 15 shooting, five assists and one turnover against Washington was the best performance of his career to date. The man would not go out without a fight and the Devils were right there because of it. Despite losing, ASU still stands third in the conference.

Last week Sun Devils MVP: Jahii Carson. For all the reasons mentioned above.

Two very winnable games at home this week against Cal and then Stanford. If they take them both, the Sun Devils put themselves in a great position to possibly compete for a pac 12 title. However, losses two either of these teams this week could be head scratching home losses for the tournament resume down the line. Carson and Felix will continue to do their thing this week. I want to see something out of Jon Gilling. For some reason his confidence seems to have diminished this season shooting the ball. If he finds his stroke, I think ASU becomes so much more dangerous offensively adding another shooting threat and he has the ability to take over a game with his shot. Just ask the Wildcats in the game at Wells Fargo Arena last year.

NAU has won only three of their last 12 games and now begin a make or break point in their season starting the second half of their Big Sky conference schedule. They currently stand seventh in the conference which is good for the last spot in the conference tournament. However there are nine teams within three games of each other in the race to finish in the top seven. Three games this week and two are at home. The first against Sac State is a big road one as the Hornets are one game ahead in the standings. The next two home games against Portland State and Eastern Washington are teams below NAU in the standings and are must win games.

Last week Lumberjacks MVP: Gabe Rogers. Continues to have a fantastic senior season. Despite two losses in the last three games he is the reigning conference player of the week, averaging 25.3 points per game in those last three.

The Lopes only had one game last week and boy it was a big one against the top team in the Pac West, Dixie State. And it ended in heartbreak as GCU lost in the final seconds of the game. Because of the loss, Dixie State swept the lopes to put a big two game plus the tie-breaker gap ahead of them with seven games to play before the Pac West tournament. Oh by the way, it was GCU’s first home loss all season, snapping their 13 game win streak.

Last week Lopes MVP: Blake Davis. Was huge off the bench for GCU which was key for them to hold a first half lead. He had a season-best 12 points off the bench in the game against Dixie State.

But now Coach Pennell and his team will quickly put that loss behind them. Up next is a four game road trip starting with Holy Names and Notre Dame de Namur this week. Both teams combined only have five wins in conference so this will be a big opportunity for the Lopes to bounce back fast to start the road trip. 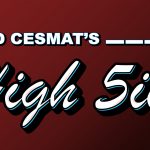