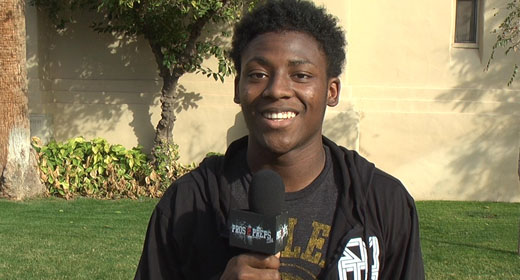 D’Amani Grayer had a dilemma when it came down to where he wanted to play his college ball at starting this fall.

This is the kind of dilemma we should all have to deal with every day.

The former Brophy running back/defensive back had three Ivy League schools who were interested in him: Brown, Columbia and Yale.

Decisions, decisions…what to do if you’re Grayer?

When it came down to it, Yale wowed him and his family so much on their visits, that Grayer totally bypassed Brown and Columbia and made a beeline for the Bulldogs.

“The main reason I chose Yale was because [of] the brotherhood the football team had and the school as a whole had,” Grayer said.

Grayer was won over by the school’s administration, and their commitment to the football program, especially with new head coach Tony Reno and his staff running the team.

Of course, Yale being an Ivy League school means academics are front and center in New Haven, Conn., which is another thing that impressed Grayer.

“Everyone there’s committed to getting their degree, going out in the world and making a difference, so that was also really attractive to me,” Grayer said.

Grayer says he’s still undecided on his major, but he’s interested in either finance or psychology, then afterwards going to law school to become a defense attorney.

You thought Grayer had a dilemma on which school to choose. Imagine being Coach Reno and figuring out where to put a talented athlete like Grayer at on your roster.

The best thing to do? Let Grayer decide for himself.

“They’ve left it up to me whether I want to play running back or corner[back],” Grayer said. “They said they definitely want to utilize me in the return game.”

Wholesale changes on a coaching staff can be difficult, or they can be easy, depending on how the staff and players all take to it.

Grayer thinks the staff changes at Yale will be for the greater good of the program.

“It sounds like they’re a lot more committed to working hard, getting in the weight room, just overall trying to produce results, so that at the end of the day, we can get the Ivy League Championship,” Grayer said.

A lot of miles will separate Grayer and his family, once he starts his journey.

He says it won’t be that bad of a transition, because his parents prepared him well for such a time as this.

“I’m not too worried about it, I just kind of take things as they come,” Grayer said. “I think it’ll be easy on us to a certain degree.”

Grayer’s family told him they’re planning on flying to New Haven for all of his games, something Grayer realistically thinks won’t happen, but he loves them for their dedication to him and what he’s trying to accomplish.

Did Grayer have second or third thoughts on his decision to attend Yale? Did he rush and make a snap decision without checking out Brown and Columbia?

“I was kind of looking for a way throughout the entire recruiting process to discount it, like find somewhere better than it, but I never found it,” Grayer said. “Even if I went on other visits, it wouldn’t have compared to Yale.”