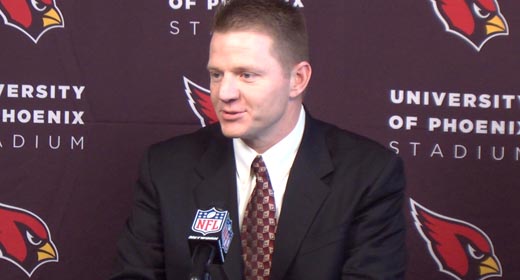 The Cardinals brought in Seahawks offensive coordinator Darrell Bevell for an interview on Wednesday for their vacant head coaching position.

A native of Yuma, Ariz., Bevell has been with the Seahawks for the past two seasons as their OC. Prior to his time with Seattle, Bevell spent five seasons as the Vikings offensive coordinator.

Bevell couldn’t have been happier to return home and sit down with the Cardinals brass.

“It’s exciting to be back in my hometown,” Bevell said. “To be able to get a call from the Cardinals is something you dream about as a little kid.”

“I’ve been able to sit in a room with Michael, and he’s been able to tell me his vision, how he sees this organization going and where he wants it to go,” Bevell said.

So much is said about Bevell, or any candidate for that matter, being the right fit for a team.

What about the team being the right fit for the candidate?

For example, Bevell mentioned Keim and Licht, and how they look at potential talent through free agency and the NFL Draft and how involved he would be in those type of decisions.

“It’s pretty exhaustive meetings in finding those situations out and how they handle it and what part of say are you going to have,” Bevell said. “[There’s] so many things to talk about to see if it’s going to be the right fit.”

Over the years, Bevell has made some players perfect fits in his offenses.

He’s worked with such names as Matt Hasselbeck, Brett Favre, Adrian Peterson, Sidney Rice, Russell Wilson and Marshawn Lynch, and they’ve all thrived under his leadership.

The reason why the players Bevell coached were successful is because he focused on making them successful, not treating them as just a number or just an athlete, but as someone he could mold and shape into someone special.

“Use their strengths, use their weaknesses,” Bevell said. “What do they do well? We want to accentuate those positives and the things that they don’t do as well, we need to try to cover those up and make their strengths come out.”

The quarterback position was clearly not a strength for the Cardinals this season, as that position was occupied by four different players, which is never a good thing.

Bevell says he’s been able to evaluate the Cardinals quarterbacks a bit, primarily because the two teams are division rivals and play each other twice a year.

His eyes saw exactly what we saw all season long: a struggling group of players.

“I know it’s been a tough situation,” Bevell said. “There’s been quarterbacks coming in and out, there’s been injuries, there’s been all kinds of different reasons.”

“If something happens, and I’m the head coach, that’ll be something that we gotta rectify,” Bevell said. “We gotta figure it out, what the best thing will be for the Arizona Cardinals and be able to go from there.”

Bevell interviewed with the Bears prior to meeting with the Cardinals. He says he doesn’t have anymore interviews scheduled, at least for the moment.

Bevell says his time is now, and he’s ready to be a head coach, whether it’s with the Cardinals or with another organization.

“I definitely feel I’m ready,” Bevell said. “I’ve put a lot of time in, I work really hard and someone’s gonna have to take a chance.”