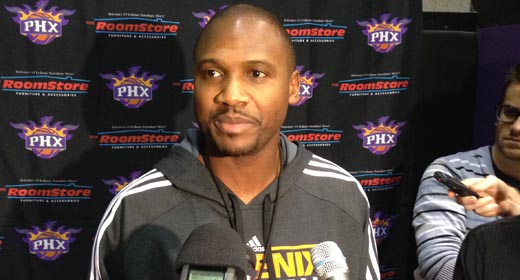 Lindsey Hunter was introduced this morning as the interim head coach of the Phoenix Suns replacing Alvin Gentry, who was fired on Friday.

Hunter has been in the Suns scouting department over the last year. He played for 17 seasons in the NBA, winning two Championship rings.

Hunter was a finalist for the Orlando Magic head coaching job last summer.

I asked Hunter and General Manager Lance Blanks this morning about the makeup of the coaching staff. Neither had a definitive answer, but it is my understanding that Suns legend “Thunder” Dan Majerle is strongly considering leaving the organization. Hunter would only say that the assistants that were on the court after practice was his staff “at the moment” and that he was trying to finalize his staff.

A source close to Majerle tells me he’s “99-percent certain” that Majerle will not return.

Majerle is a Suns legend and Ring of Honor inductee, who is in the middle of his fifth season as a Suns assistant.