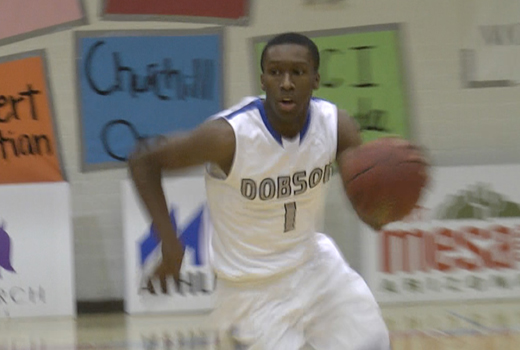 Dobson senior guard is a flat our scorer. He can score from the outside, he can beat you off the dribble and score from the inside, over you, under you and in-between. That is one of the main reasons Hopkins is one of the prized recruits of the Colorado Buffalos 2013 class.

But Hopkins also has very good ball handling skills that can give him looks at the point guard position at the next level as well. So where does Hopkins see his skill set fitting in the most with the Buffalos next fall? Shooting guard or Point Guard?

“A little bit of both. A combo guard. That’s what Coach (Tad) Boyle wants me to play,” Hopkins explained. “As a freshman hopefully the point so I can hit guys in the right spots and hopefully go from there.”

“Right now I am working on my shooting because all of the guys at Colorado can shoot it really well,” added Hopkins. “I’ve got to get stronger too to be able to play at the collegiate level.”

Coming into the season, many expected Dobson to be dominate with a roster that also includes ASU commit Kodi Justice and also junior guard Ryan Richardson. While the team won 11 of 16 games before the start of 2013, they are still all trying to get into a consistent rhythm. And Hopkins says that is the direction they are heading.

“Right now we are just getting Kodi (Justice) back. One of our main players,” Hopkins said. “Chemistry’s getting better and we are getting in practice and moving the ball and stuff like that. So that will get us back on track.”

Personally Hopkins is averaging just over 23 points per game with about a 48 percent shooting percentage. In his first and what will be his only season at Dobson since transferring from Basha, he is finding he is getting into more of a rhythm as the season progresses.

“I started off in a rhythm but by game five or game six I slowed up a little bit,” mentioned Hopkins. “But hopefully I am getting back in it.”