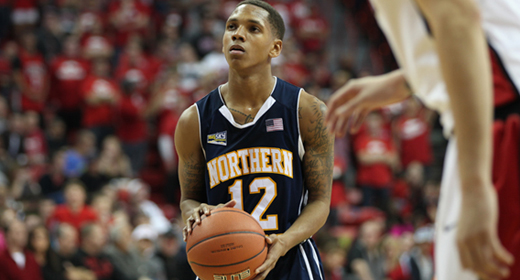 Everyone in Jobing.com Arena knew he was going to have the ball in his hands. The Peoria Panthers were eyeing a state championship and senior point guard DeWayne Russell was looking to lead his team to a great second half comeback.

With the game tied, Russell drew about three or four defenders when bringing the ball up the length of the floor. When everyone expected he would shoot, Russell made a pass to a wide open teammate under the basket for the game winning shot to win.

Those who saw it in person like to refer to it as “the pass.”

“Thats a thing I will never forget,” said Russell via Skype with Pros2Preps.com. “It was a great experience to have a great group of friends and we just went out there and had a good run at the state championship.”

The success Russell had at the high school level has quickly transferred to the collegiate level. He has started 13 of the Lumberjacks 14 games and not only leads the team in scoring, but leads the Big Sky as well and is seventh in the nation in points per game for a freshman. Just one spot below another Arizona native in that category, Jahii Carson for Arizona State.

The two time Big Sky Player of the week has been an unexpected bright spot for the team about halfway through the season. So unexpected that even Russell admits he didn’t see it coming.

“No, I did not expect this stuff to happen,” Russell explained. “I am blessed that it’s happening. I just have a really good set of coaches again up here at NAU and I got a good set of teammates that help me out a lot.”

Russell is growing and learning in his first year with the Lumberjacks along with first year head coach Jack Murphy. Who Russell says has been vital to his success to this point.

“We have a really good relationship,” said Russell. “We both have the same goal of winning Big Sky championships in the future and just being good…He’s a good fit for me.”

Murphy has made it a point of emphasis to recruit Arizona to NAU. He has three players currently on the roster that are from Arizona and has more coming in the next few years. As Phoenix native himself, Russell thinks this notion Murphy is taking is going to make the program stronger and stronger.

“We have a lot of talent in Phoenix. People don’t know that,” Russell mentioned. “There are a lot of kids in Phoenix who are really really good and Coach Murphy sees that. That’s why he offered so many kids that’s down there.”

“I think it’s a good thing,” Russell added. “It’s especially a good thing for Phoenix kids to come up here because you get kind of away from your parents but you can still see them so it’s really good. I can see my family whenever I want to see them but at the same time still get my college experience.”

The Lumberjacks themselves have had a solid season through 14 games and their play on the floor doesn’t fully describe their 5-9 record. They have had a very tough schedule having played Oregon, UNLV, U of A, Colorado and BYU all on the road.

“We’ve took our bumps and bruises so far and we’ve won some games but we’ve also lost some games but the games that we lost we’ve learned a lot from,” Russell stated. “So going forward I think you are going to see more of the brighter side.”

Russell is solidifying himself as a leader and soon to be the face of NAU basketball in just his first season. Paving the way for a career in Flagstaff which could be one to be remembered for a long time.

“Just a winner,” said Russell. “I would like to bring a couple of Big Sky championships to the school and just a winner. All I want to do is win.”