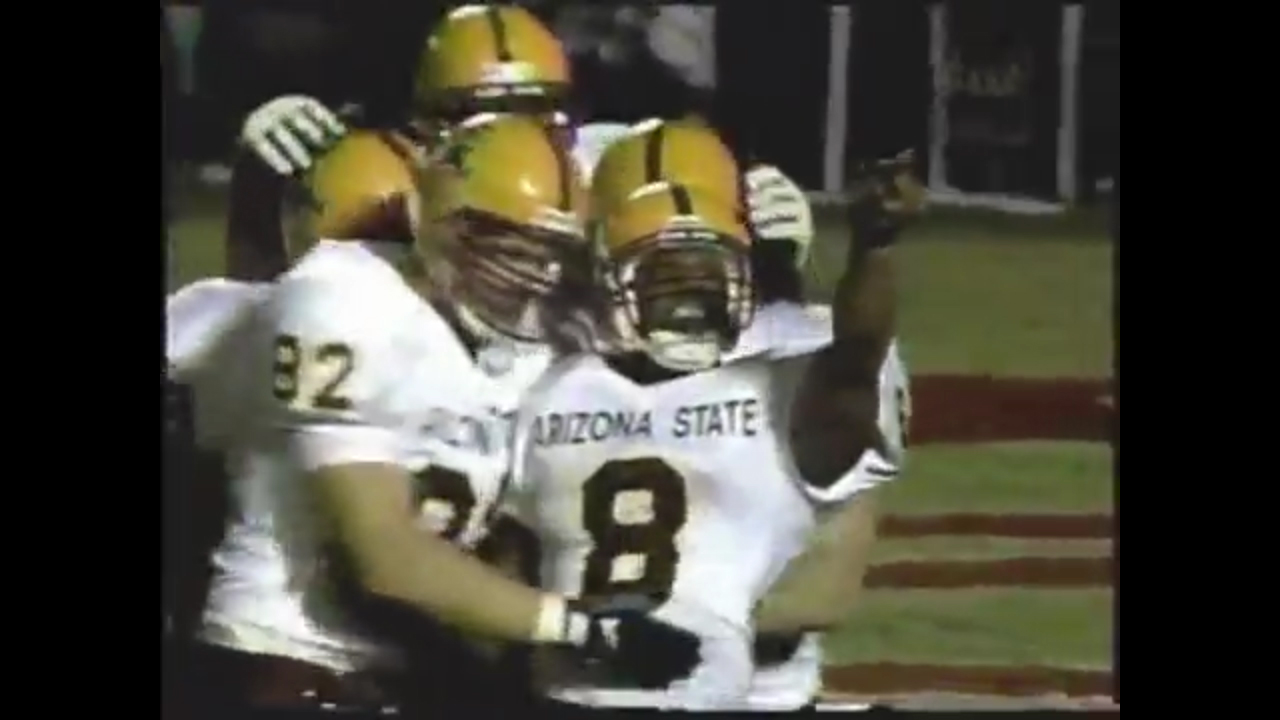 The Sunrise Mountain running game was deadly this past season.

The Mustangs averaged 281 yards rushing per game, and they had 41 rushing touchdowns overall.

Despite those incredible numbers, head coach James Carter feels his running backs and his program needs something extra to push them to a state title next season.

For Carter and Sunrise Mountain, that extra push comes in the form of former ASU running back Terry Battle, who Carter recently hired as his running backs coach.

How could Sun Devil fans forget 1996, and what Battle did for them and the team?

Battle started six games that season, and ran for 1,043 yards and 20 touchdowns (18 of them rushing).

Battle went on to play both in the NFL and NFL Europe, before various injuries made him take a step back and evaluate his future. His choice after that was simple: retire while he still has some semblance of a mind and a body.

Carter and Battle hooked up through a mutual friend, who wanted someone to speak to a group of eighth graders who were moving onto high school.

These young men also played football, so the talk from Battle was going to be, in his own words, about “academics, hard work and character,” three things Battle and Carter both embody.

Evidentially the talk Battle gave was strong enough that Carter offered him the job. Battle said he really wasn’t looking to get into coaching, so the offer kind of caught him by surprise.

Battle told Carter that he was concerned about the lack of family time that normally comes with being a coach on a football team, or on any sports team for that matter.

“I really didn’t want to go that route with my kids and them being in their extra-curricular activities,” Battle said. “But I thought, what an opportunity at this point, and I really look forward to working with Coach Carter.”

Battle said Carter’s “philosophy and passion” for giving back to his student-athletes is what won him over, making the “Yes” even easier to say.

This will be Battle’s first coaching gig, but Carter knows the track record that Battle brings to the table, and he has all the confidence in the world in him, otherwise he wouldn’t have offered him the job.

“I think by far, he’s gotta be one of the better running back coaches, even though he hadn’t coached,” Carter said. “Not only football for my team, but also being that character guy on and off the field.”

Carter said Battle will go to football clinics with the team, in order to get indoctrinated in the ways of Mustang Football.

Sunrise Mountain is more of a spread offense with a little “I-Back” mixed in, which is something Battle is familiar with from his days in Tempe, Ariz.

“We do run some of that, we have that in our repertoire, but we haven’t used it, so we might incorporate that a little more next year,” Carter said.

That’s where Battle would become invaluable to this team, because he’s quite experienced with that type of system.

“We might use his expertise in that area of the game,” Carter said.

Between them, they ran for 1,855 yards and 24 touchdowns last season, so Battle is inheriting two monster talents which should make the transition a bit easier.

“It definitely caught my attention when I found out that we had these two great running backs,” Battle said. “I look forward to meeting the young men and getting an opportunity to spend some time with them.”

Battle has his game-plan already set as far as what his approach will be once he officially starts at Sunrise Mountain.

“On and off the field, I really want to focus on the importance of academics,” Battle said. “Most importantly, as the football aspect, just getting an opportunity to find out what their strengths are, what are some things they feel they can improve on in their game.”

Castro says the hiring of Coach Battle couldn’t have come at a better time, especially for him.

“We’re excited to have him on staff,” Carter said. “Next year I want to get over that hump, and bringing Terry on board can only help us to achieve the goal of 14-0.”