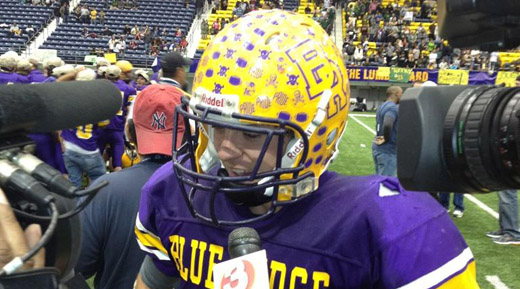 Arizona State football fans should feel very good about the pending arrival of Blue Ridge Linebacker Chans Cox. His close friend and teammate from the 2011 Yellow Jacket State Champion team, Danny Groebner, is going to be Cox’s roommate and will walk on this spring as a kicker for the ASU program and perhaps play receiver.

Groebner pursued baseball this past year at Cochise Community College in Douglas, Ariz. but decided to give football another go-round after visiting with ASU assistant coaches. I spoke with Groebner earlier tonight, he and Cox will move in on campus January 7.

While at Blue Ridge, Groebner was one of the state’s best all around players. He rushed for 1450 yards and 22 touchdowns, while catching 32 passes for 451 yards and six touchdowns.

Of course, Cox is considered one of the crown jewels of Todd Graham’s 2013 recruiting class.