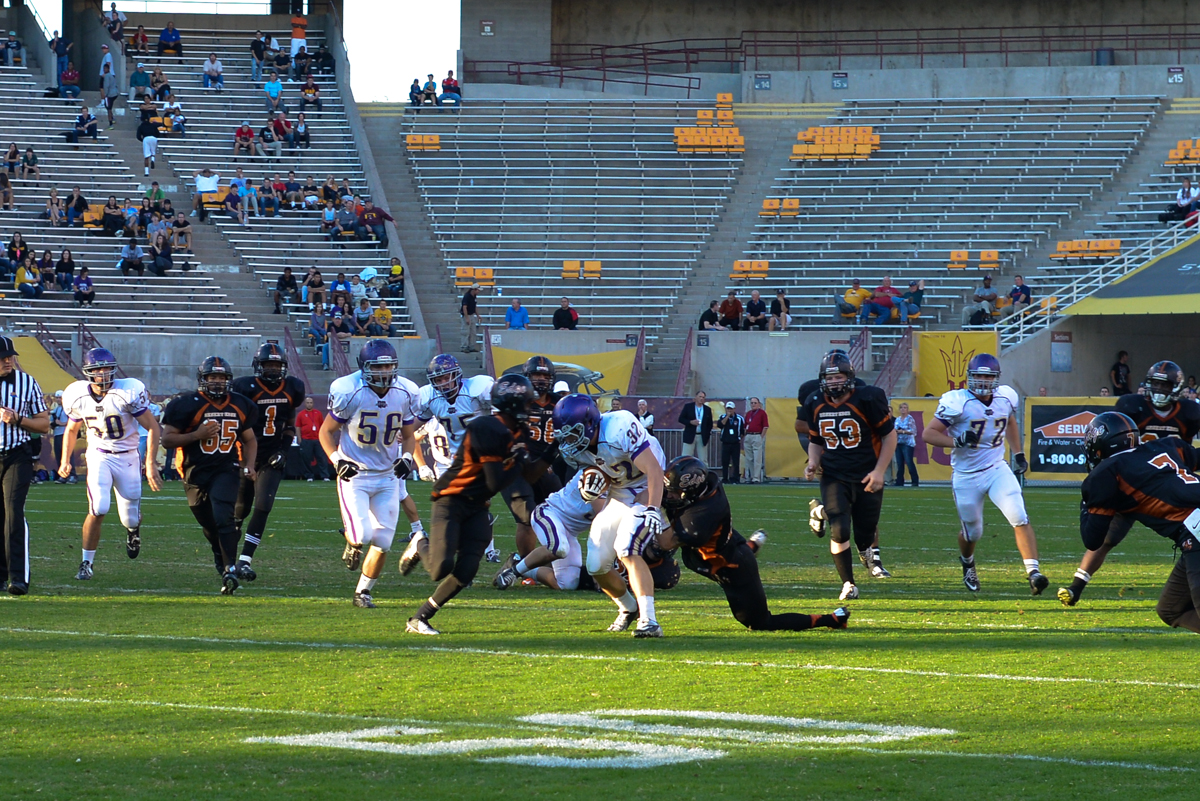 First and foremost congratulations to Hamilton, Ironwood Ridge, Queen Creek, Seton Catholic and Northwest Christian on being state champions in 2012. It was a great season with more parity across the board than has been seen in a long time which resulted in an exciting playoff tournament.

But let’s not waste any time and look ahead to the 2013 season.

The 2014 class maybe the one of the most talented and deepest classes to come out of Arizona in a long time once all is said and done next year. Scout.com has eight players in that class that rank in the top 25 in the nation at their position and that only tells the beginning of the story.

In Division I, it will start with an East Valley team that was on few people’s radar before the start of the 2012 season. The Desert Mountain Wolves have the best quarterback-receiver tandem in the state in Kyle Allen and Mark Andrews. As juniors, the two connected for almost 1500 yards and 21 touchdowns as juniors in 2012. This team will only improve coming into 2013 behind this dynamic duo.

Staying in Division I, the Mountain Pointe Pride had a spectacular 2012 season making it to the state title game and just coming up short to Hamilton. They lose one of the top offensive lineman in the state in Kenny Lacy and running back Garette Craig but are returning a great core of players. That includes wide receiver/defensive back Jalen Brown, offensive guard Natrel Curtis, and quarterback Anthony Hinojosa on offense and the teams leading tackler, hard hitting linebacker Wesley Payne on defense. The Pride made the state title for the first time in 2012 and have the talent and experience now to do it again in 2013.

Hamilton, Desert Vista, Chandler, Brophy, Basha and Desert Ridge all expect to retool in 2013 and be very tough as usual.

The player to keep an eye on in 2013 will be North Canyon Mr. Do it All Bryant O’Georgia. He plays wide receiver, defensive back, kick returns and lines up to block punts and is even the teams punter and is great at that as well. He is on the field just about the entire game. North Canyon was very young this season but will have more experience in 2013 and if the opposition sleeps on O’Georgia, he has the ability to beat you single handedly.

In Division II, keep your eye out for the Tucson schools. Ironwood Ridge is the defending state champions and have been to at least the state semi’s in each of the last three seasons. They lose a great senior class but have talent waiting in the wings.

Salpointe and Sabino return an amazing amount of talent. The Lancers return all-around stud Cameron Denson who is being recruited by pretty much every Pac-12 school and then some. And return quarterback Andy Cota, when healthy in 2012, completed 65% of his passes for just under 1800 yards. But what will make them so tough to deal with is what stands on defense. They lose a great linebacker in SMU commit Carlos Carroll but return two players, Taylor Powell and Jake Casteel, who had more tackles than Carroll and will make up one of the best linebacking cores in the state.

Sabino was shocked by Nogales in the first round of the playoffs this season but should be back and even better in 2013. Offensive lineman Andrew Mike and tight end Matt Bushman have great Division I talent and are a matchup nightmare.

Before leaving Division II, the Chaparral Firebirds didn’t make the state championship in 2012 which is a disappointment in their eyes but they were young. Wide receiver/defensive back Tyler Whiley, tight end/defensive end Trevor Wood, running back Emerson Carrethers and his eight yards per carry as well the talented young arm of Sean Paul Brophy at quarterback make-up a core of Firebirds that intend to return to the promised land in 2013.

You cannot talk about Chaparral football without thinking about Saguaro football as well. In Division III, the Sabercats also had a much earlier exit than most are accustomed too. But next year’s senior class will consist of the team’s quarterback and leading rusher Luke Rubenzer, 6’4” 275 pound offensive tackle Alex Anderson and the teams leading tackler in 2012, linebacker Chris Counce. And you can’t leave out one of the best playmakers in the state who will only be a junior, wide receiver and defensive back Christian Kirk. Coach Mohns and his Sabercats will be hungry in 2013.

The defending champion Queen Creek Bulldogs lose a fantastic senior class that led them to an undefeated season. But return a dynamic running back in Matt Guida who led the state in total yards and 30 touchdowns in route to the state title.

Desert Edge also returns talented players led by Ismael Murphy-Richardson and Elijah Marks at the wide receiver position and defensive back Raheem Dowdell who led the team in tackles. The Scorpions will have a chip on their shoulder coming off the gut wrenching state championship loss.

“Heart” of Padres Defense Ready To Take Over