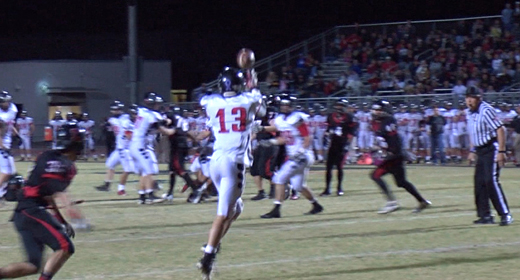 Division III playoff action was in full effect on Friday night, as eight teams did battle against one another in the quarterfinals.

One half of the quarterfinal bracket saw the No. 4 seeded Liberty Lions playing host to the Black Hawks of Williams Field, the No. 5 seed.

Williams Field knew it would be tough to come to Peoria, Ariz., and knock off the Lions, especially considering Liberty lost just once at home all season long.

Make that two home losses, after the Black Hawks 53-30 dismantling of Liberty on Friday night.

The Lions end their season at 10-2 with the loss, while Williams Field improves to 11-1 with the victory.

Both teams would trade scores in the first half, with Williams Field taking a slim 19-14 halftime lead.

The Black Hawks would flex their muscles in the fourth quarter, scoring 28 points in the quarter to put the game out of reach.

Williams Field will face top-seeded Desert Edge in the semifinals next Saturday night. The Scorpions rallied from a 21-3 halftime deficit, and ran past the defending state champion Saguaro Sabercats 38-35.

What was a quiet Scorpion offense in the first half erupted in the second half, as they scored 35 points to cap a stunning comeback and send Saguaro home with their fourth loss of the season, and none worse than this one.

Desert Edge head coach Rich Wellbrock said there wasn’t any type of panic in their locker room at halftime. He said his team did what needed to be done to get the win.

“We know our kids,” Wellbrock said. “They’ve got a great coaching staff, and they just made adjustments at halftime.”

Williams Field and Desert Edge will lock horns next Saturday night for the right to move onto the championship game at Sun Devil Stadium on Nov. 24.