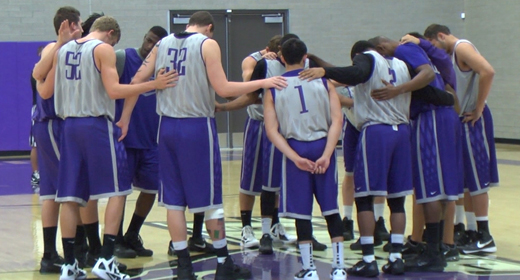 Last season. in Russ Pennell’s third-year as Grand Canyon head basketball coach, he guided them to 19 victories and an NCAA tournament berth.

Needless to say, with a beautiful new arena, and a team with talent and a winning attitude, things are looking bright for the Lopes as they’ll head to Logan, UT, on Friday night to take on Utah State in the first of two exhibition games prior to the start of the regular season.

The Lopes have 16 players on their roster – 12 of whom are from the state of Arizona.

“We’re extremely deep, we can go down 10, 11, 12 players, and really there’s not much difference in them,” Pennell said. “That gives me a lot of flexibility to run people in and out of the game, and it also allows us to play a very fast paced game.”

Pennell said his team will push the on-court tempo even more than they did last season, especially from a defensive standpoint.

“We’re pressing all over the court, from baseline to baseline,” Pennell said. “I think it’s an exciting brand of basketball to watch.”

Pennell says the Lopes’ success last season has inspired the players to do even more during the offseason to ensure they don’t dip below that mark.

Forward/center Braylon Pickrel is one of four seniors on the team, and one of the “Arizona 12” on the roster. Last season, Pickrel led the PacWest Conference in blocks [63], and was second on the team in scoring [10.6 ppg].

Pickrel notices a “different dynamic” with this year’s Lopes team. He mentioned the loss of guard Kyle Speed due to graduation, but he also mentioned the addition of the “Lowery Brothers,” Jeff and Joshua, and how impactful they’ll be.

“The thing I like the most is the addition of Killian Larson down low now, so I can kinda move to the four position, which is a little more natural for me,” Pickrel said. “I love getting down there with the really big guys.”

Pickrel says at the four, he’s going to have to guard players who may be a bit smaller and quicker than guys he’s normally used to guarding. He says that was his biggest adjustment coming into this season.

“In practice, instead of guarding like Barret [Robbins] or Killian, who spend most of their time in the post, I try and guard Blake [Davis] and maybe somebody a little quicker, so I can kind of get used to guarding someone on the perimeter,” Pickrel said.

Larson- a center – transferred to Grand Canyon from Dominican, but because he transferred inside the conference, he had to sit out all of last season, per conference rules.

“It was super hard at first,” Larson said, when talking about taking the year off. “But after a while I kinda got used to it, I used my practices as game time.”

Larson says he’s very excited to be part of the Lopes, and he’s ready to shake off his first “game time rust” come Friday night against Utah State.

“I won 14 games in my two years at Dominican, so when they win 19 games in one season, that’s an automatic plus for me,” Larson said. “Plus we go to the national tournament, I can’t ask for much more, so I’m really excited for this season.”

Catch ‘Russ Pennell’s Coach’s Show’ every Tuesday at 1:30 p.m. on ‘Big Guy on Sports’ with Brad Cesmat, here on Pros2Preps.com or on XTRA 910AM.