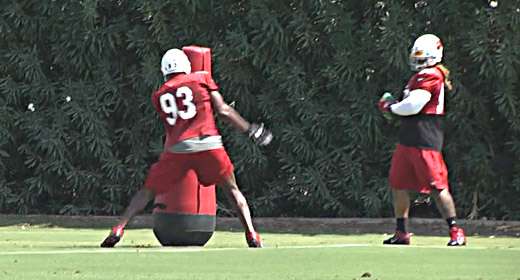 Since 2002, when Gillette Stadium opened, the Patriots have only lost there 13 times during the regular season.

Just as incredible a stat: in that same time span, New England is 18-2 at home versus NFC teams, with one of those 18 wins coming against the Cardinals – a 47-7 win on December 21, 2008 – a game Patriots quarterback Tom Brady didn’t even play in!

The Cardinals face a tough task on Sunday: going into a viper pit, coming out unbitten and with a win over one of the best teams in the NFL: the New England Patriots.

Head coach Ken Whisenhunt knows New England is about as put together a team as you’ll find in the league, and any mistakes you make against them, they’ll take full advantage of.

“Their team has been very successful, and they do a great job of playing their scheme and making you earn everything you get,” Whisenhunt said. “We can’t afford to make the mistakes that we made last week [vs. Seattle] and expect to have success, and I mean the big returns on special teams, the fumble, the interception.”

“Those are things that you can’t do,” Whisenhunt said.

Tom Brady is the unquestioned leader of the Patriots (no disrespect to head coach Bill Belichick of course).

Cardinals nose tackle Dan Williams knows the defense will have to play as one, and take Brady out of his comfort zone if they expect to have any chance of coming away with a victory.

Just because it’s Tom Brady doesn’t mean you can’t throw him some different looks defensively, because you have to, in order to make him think more than he normally would.

Defensive end Calais Campbell realizes how smart a player Brady is, which is why the defense has to fight fire with fire.

“He [Brady] always comes with a wrinkle himself, so whatever we prepare for, he’s probably going to change-up and do something else,” Campbell said. “We have to be able to think on the fly and try to make plays.”

Because they’re on the East Coast, the  game kicks at 10 a.m. Arizona time on Sunday, something linebacker Daryl Washington is preparing himself for well in advance.

“It’s an early game for us in our minds, so we definitely have to be ready for it and make sure that our bodies are up,” Washington said. “I’m trying to get in that routine of getting up early and making the most of that.”

Cardinals come out of Patriots territory with 20-18 victory