The NFL is all about opportunity.

Nobody knows better than Cardinals quarterback Kevin Kolb who relieved an injured John Skelton and led Arizona (1-0) to a dramatic 20-16 win over the Seattle Seahawks (0-1) in Glendale.

“I thought Kevin did a great job coming in and moving the team in a critical drive for us,” head coach Ken Whisenhunt said after the game.

Things started slowly offensively as the teams exchanged in the first quarter. Both young quarterbacks Russell Wilson and Skelton looked good at times, but both missed key throws and failed to convert a third down (Seattle 0-2, Arizona 0-1).

Arizona took that 10-3 lead into the half after Adrian Wilson picked off Wilson on the final play of the second quarter, killing a potential scoring drive.

Skelton finished the first half an efficient 11-17 for 124 yards with no touchdowns and most importantly, no interceptions. His passer rating was 86.4.

The Cards defense set up Skelton and the offense early in the second half when Paris Lenon recovered a Marshawn Lynch fumble which was originally called an incomplete pass. Lynch was blasted seconds after taking the swing pass by Sam Acho.

After the drive stalled, Jay Feely extended the lead to 13-3 with a 31-yard field goal five minutes into the third quarter.

Leon Washington put the Seahawks in business with an 83-yard return on the ensuing kickoff. Only great hustle from reserve tight end Rob Housler kept Washington from taking it the distance. On third and nine, Wilson spotted Sidney Rice for his first career touchdown toss to pull Seattle back within a field goal.

Skelton’s first big mistake came on the ensuing drive when he was picked off in front of the Seattle sideline by a diving Richard Sherman as he was attempting to throw the ball away. Steven Hauschka tied it at 13 with a 47-yard field goal after the Arizona defense held.

It was a quarter to forget for the Cards offense who mustered only 14 total yards on five possessions with no first downs.

Things went from bad to worse for the Cardinals when Skelton, who finished 14-28 for 149 yards and an interception, was carted off with what was diagnosed as a low ankle sprain.

Taking over at his own 32, Kolb methodically moved the offense down the field before hitting Andre Roberts who dashed into the corner of the end zone to put Arizona back on top with under five minutes to play. Kolb was 6-8 for 66 yards on the drive.

“It was stressful, I’m going to lie,” Kolb explained. “To win a game in that fashion, the way the preseason went, I’ll definitely enjoy it [Sunday] evening and [Monday], and then get back to work.”

The Cards defense then held the Seahawks out of the end zone four times at the Arizona six-yard line to secure the win.

“The mindset is still the same, ‘just one play at a time,’ cornerback Patrick Peterson said about the final stand. “Like I told the guys earlier, they can put the ball on the one yard line, our job is to keep them out of the end zone, period. If they don’t score, we win.”

Skelton is expected to miss 4-6 weeks. 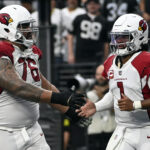