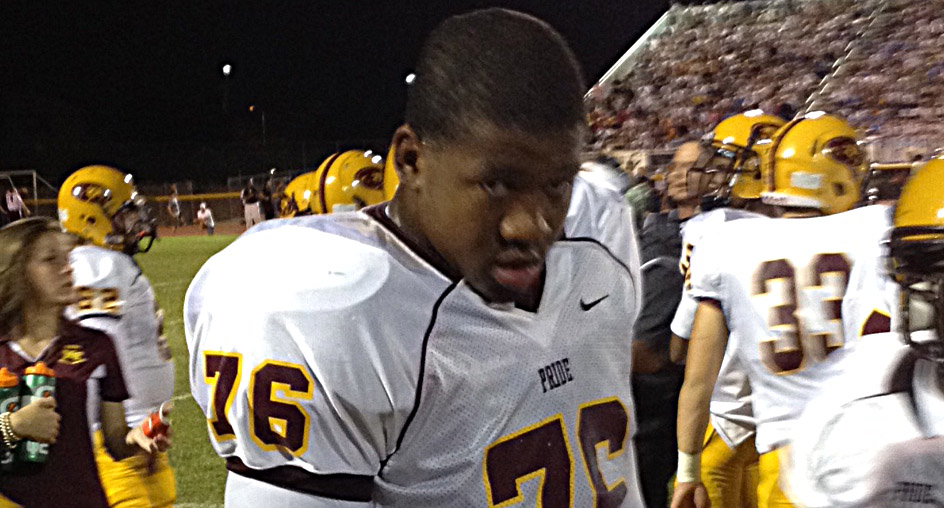 Most high school seniors are trying to decide between a handful of colleges to attend next fall.

Kenny Lacy had his pick of 30…and counting, before deciding to commit to UCLA.

Friday I got my first chance to see the 6’6, 270-pound offensive tackle as Lacy helped Mountain Pointe improve to 3-0 defeating rival and defending state champion Desert Vista 23-21 in the annual Ahwatukee Bowl.

It’s easy to see why colleges from around the country are scouting this former basketball player who didn’t even begin playing offensive tackle until last season. Watching from the Pride sideline, it’s evident the skills he learned on the hardwood will help him on the gridiron at the next level. He was quick attacking edge-rushers and got downfield quickly on sweeps and screens for a player his size.

“Kenny is extremely athletic,” Scout.com recruiting insider Jason Jewell told Pros2Preps. “He has long arms, is a natural knee-bender, and has good strength.”

I was also impressed with his stamina as he played both tackle and defensive end often times staying on the field for a change of possession following a turnover.

Jewell believes Lacy’s natural fit in college will be at tackle.

“He has good feet, long arms, and great athletic ability,” he explained. “His improvement from his junior to his senior year has been absolutely incredible. He has really become a good offensive tackle.”

The Ahwatukee Bowl to bring fireworks on Friday