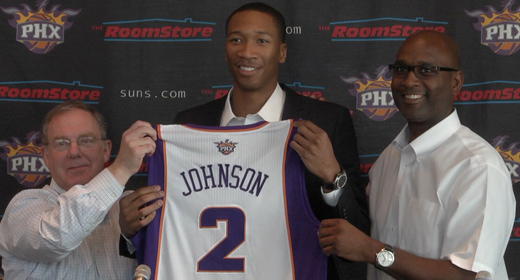 While in college, Johnson left Iowa State and joined the Syracuse Orange for his senior season. A season that brought much individual and team success which in turn, skyrocketed him into being drafted fourth overall in the 2012 draft by the Minnesota Timberwolves.

However, there was pressure of being a lottery pick and Johnson struggled to secure a role with Minnesota while averaging just 7.7 points and 2.9 rebounds in the 144 games with the team. It was clear from both parties that a change of scenery was eminent. And Johnson knows because of his past, change can ultimately lead to big things.

“I bounced around in college. One place didn’t work for me so I went to Syracuse and it was like paradise,” Johnson explained when introduced in Phoenix for the first time on Tuesday. “I talked to my family a lot and my brother and he said it is like history repeating itself so I plan on having that success here.”

In the eyes of Johnson as well as the Suns front office, this has the makings of being a great fit.

“What we are really excited about are the people and the human beings that are coming here,” added Suns President of Basketball Operations Lon Babby. “As excited as we were to get a first round draft choice in this most recent transaction, what excites us is to bring a person of the caliber of Wes Johnson here.”

The addition of Johnson accomplishes a big need at the wing position that the Suns had not filled. Shannon Brown was brought back on a two year deal, but the wing spot was still an area that needed more depth as Suns General Manager Lance Blanks pointed out.

“When you looked at our roster before a few days ago, we were getting a lot of calls from agents about our wing position,” explained Blanks. “Thankfully that ceased with this transaction because Wes will sure up that position along with Shannon Brown and (Jared) Dudley.”

Johnson coming to Phoenix allows him to join a new environment not just from a basketball stand point, but also from a weather stand point. Having spent most of the last decade in Ames, Iowa, Syracuse, New York and Minneapolis, Minnesota, Johnson has seen more snow then he would like. Coming to Arizona allows him to rekindle a relationship with one of his “best friends”.

“I’ve been in the snow for quite a bit so the sun has been good so far,” Johnson mentioned. “I’m from texas so the heat is one of my best friends and I have missed it a lot.”

The Suns have now brought in six new faces to the roster and more will come. The team will introduce Forward PJ Tucker from the University of Texas on Wednesday as well.  The team was pleased with his play while with the summer league team. And another need at back-up Center expects to be filled soon as well before the start of camp at the end of September.