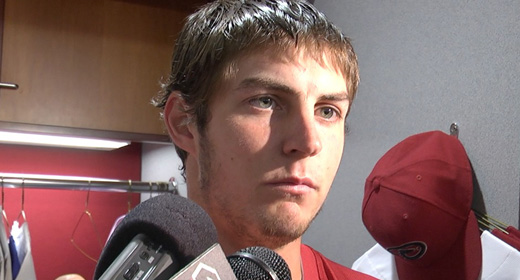 The show started well before the first pitch as Trevor Bauer, first round and third overall pick of the Diamondbacks from the 2011 draft, made his way out to the Diamondbacks left field bullpen.

Fans gathered and cheered as they watched Bauer participate in a variety of different stretches and a warm-up toss that ultimately turned into an anything you can do, I can do better-esk game of long toss as he threw from the right field foul pull to the left field foul pole.

Fans gave Bauer an ovation just for finishing his warm-up routine which from the time he walked out to the bullpen to the time he returned to the Diamondbacks dugout, took an hour and 15 minutes. But it was only the start of what would be a disappointing show for the 21,329 fans that made their way out to Chase Field on Tuesday night for Bauer’s home debut.

“It was cool to see all of the fans out here early cheering for me,” said Bauer. “I am a little disappointed in how I pitched. Obviously the fans and everybody was hoping for a better outing.”

Bauer would not make it through four innings with his final line in his home debut, three and 1/3 innings, six hits, seven runs (six earned), four walks and four strikeouts on 80 pitches. 45 of the 80 were strikes, earning the loss in the Diamondbacks 9-5 loss to the Padres.

Bauer took the mound in the top of the first and was in a groove. He would strike out Will Venable, Alexi Amarista and Chase Headley swinging on just 13 pitches.

But the second inning was a different story. Bauer would give up his first runs in Chase Field on a two run home run off the bat of Yonder Alonso. He would also walk two batters in the inning, including opposing pitcher Andrew Cashner. Bauer would escape the inning without any further damage but that pitch count shot up from 13 to 49 after two innings.

“It’s the same game, you just have to execute your pitches,” explained Bauer when asked about the adjustment pitching in the big leagues. “They have better eyes up here, they work counts better. Yeah they are better hitters. Big Leagues.”

Bauer got into more trouble in the 4th as he gave up five more runs in the inning. The big blow, a bases clearing double off the bat of Chase Headley.

“It was tough, there was a lot of pressure on him,” explained Diamondbacks Manager Kirk Gibson. “There has been a lot built up about him. It hasn’t went well for him. That’s just part of being in the big leagues.”

One area that Bauer did express concern has been the execution of his curve ball, but said nothing will change in his routine or his mentality on the mound after two tough starts.

“I have been doing the same thing for years and years and years,” Bauer mentioned. “This is one of my only poor starts of the year. There is no reason to panic or change or anything like that. Obviously there are adjustments that need to be made and I need to be better at locating pitches and what not, but it happens.”

Meanwhile, another top prospect up with the club, Patrick Corbin who has been pitching out of the bullpen, pitched four and 1/3 innings in relief giving up four hits, two runs (one earned) and struck out six. He also reached base twice and made a web gem play to get a force out at second base in the field.

“He played well. He did a good job, no question about it,” Gibson mentioned about Corbin’s performance. “He is very athletic as you know and he executed his pitches.”

Diamondbacks have dropped four straight, and two straight to the Padres to start the current home stand. Will have one more with San Diego before three with the Dodgers before heading back out on the road.