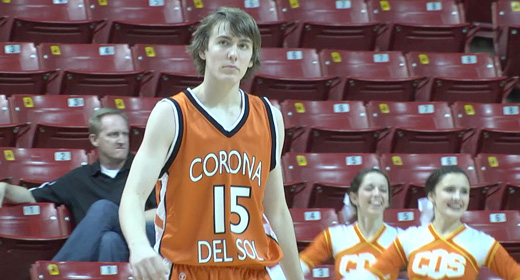 It was a special 2011-12 season for the Corona del Sol Aztec basketball team. They won 30 games in a row on their way to a state championship.

“It was truly great. A tremendously blessed season,” Benson mentioned. “I will always remember the closeness we had as a team and the chemistry. We really clicked as we went throughout the season.”

The scrappy and aggressive Benson will always remember the run his team went on last year. But now having won a state title early on, Benson finds he is even more motivated to get back to that stage for his junior and senior seasons.

“Winning one just makes me want to work harder to get back just because it was so fun,” explained Benson. “It’s going to be really tough. Obviously everyone is working hard to get to a state championship. That’s the main goal for every team. But it’s going to be a fun season and I am really excited.”

Not  many get the opportunity to play varsity as a sophomore, but since he already gained that year of experience at the that level, his sights are now set on how he can improve his game to be ready at the next level.

“One of the main things I’m working on now is strength and quickness for the next level,” Benson mentioned. “Along with sharpening every aspect of my game up.”

After just two high school seasons, Benson has offers from ASU, St. Mary’s, Boise State, Colorado, USC, Boston College, Rice and GCU. He has plenty of time to decide and will undoubtedly receive more offers from great programs before all is said in done. But for now, Benson is keeping an eye on what would be the right fit.

“Style of play, how I fit with the team and obviously coaches,” Benson explained when describing the factors that will go into his college choice.