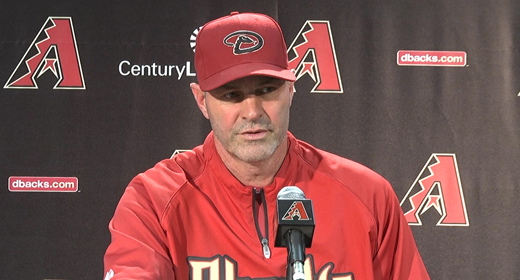 The Diamondbacks took on the Oakland Athletics in a three-game weekend series.

Across the field, was a familiar face in  Athletics manager Bob Melvin, who was Arizona’s manager from 2005-2009.

Melvin will forever go down in Diamondbacks history as the manager who led them to a National League West title back in 2007. Melvin also picked up National League Manager of the Year honors that year as well.

Gibson came on as Melvin’s bench coach in 2007, and to this day, Gibson says he and Melvin are the best of friends, even though they are managing against each other now.

“He’s very smart, very heady,” Gibson said. “I respect him tremendously and immensely, as much as you can respect somebody.”

Following a 4-0 shutout at the hands of the Rockies on Monday, the Diamondbacks bounced back to take the final two games of the series.

The team has a bit of momentum coming into the series with the Athletics, and they’re hoping right fielder Justin Upton catches on for the ride.

Upton returned to the line-up on Friday night, after being benched for three of the last five games, primarily because of his struggles at the plate.

Over his last 10 games, Upton is batting .205, with nine strikeouts.

However, Gibson has seen improvements in Upton, hence the move to put Upton back on the field.

“He looks good to me today, he looks refreshed, recharged,” Gibson said.

On the interleague portion of their schedule,  Gibson said he’s not sure who has the advantage: American League or National League.

“I just know that we’re gonna come out tonight and try and win a ballgame.”

Lastly, Gibson said Stephen Drew is coming along quite well, playing in his first rehab game on Thursday night, since his ankle injury nearly a year ago.

“Everything was good, he looked good,” Gibson said.