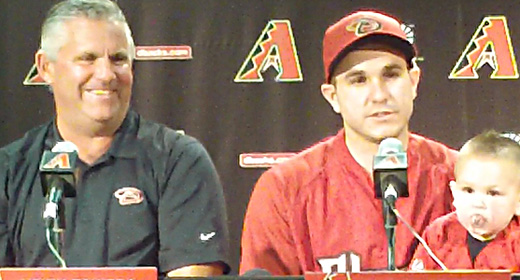 Executive Vice President and General Manager Kevin Towers knows that resigning Montero was of utmost importance, especially considering what he’s done for the team over his seven seasons in Arizona.

“Nobody does it better than Miggy,” Towers said. “If we were to label somebody the captain of our ballclub, this guy would be the captain.”

Montero could’ve been on the market during the offseason, after both sides agreed on a one-year, $5.9 million deal, effectively avoiding arbitration last winter.

“It became very clear to us that if we waited too long and got too close to free agency, it would’ve been difficult [to retain Montero],” Towers said.

“To me, even if it was somewhat of an overpay situation, it was worthwhile because of the importance of the position, the player and the intangibles he brings.”

Montero had perhaps his best season as a Diamondback in 2011, as he was named to his first National League All-Star team, finished third in the NL Gold Glove Award balloting, and received a ninth-place vote in the NL MVP poll.

Montero showed himself to be a beast defensively as well, throwing out a club-best 47.7 percent of attempted basestealers (28-for-60).

“I couldn’t be happier, to be honest,” Montero said. “For me it’s just a blessing to stay here, hopefully for the rest of my career. My family is happy to be here, we like the city, we like the fans, we like the stadium. It was the only place I wanted to be.”

To go along with all the numbers and accolades Montero’s received over his career, it’s the intangibles that Towers talked about that his manager, Kirk Gibson, is most impressed with.

“The good thing about Miggy is he sets a great example for his teammates,” Gibson said. “Most of all, the energy he brings to the ballpark each and every day, it’s unbelievable. He’s been an All-Star and I know he wants to be a World Champion.”

Could we see front office changes coming to the Diamondbacks this off-season?

The player named later is “the key piece” in Diamondbacks trade of Bell, Holmberg