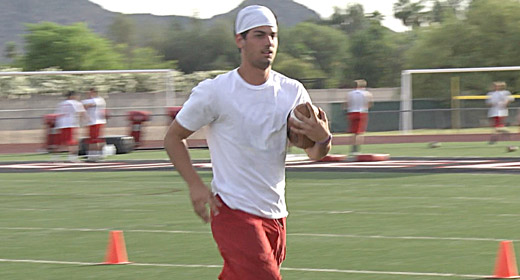 Big names have led the Chaparral Firebirds football team during their current three-peat as state champions.

Last year, the Firebirds had a senior class that was second to none, led by Connor Brewer who is at Texas, Devonte Neal who is heading to Notre Dame, Dylan Cozens and Cody Ippolito who are heading to Arizona and many more.

Now a new class of Chaparral senior leaders are forced to fill some big shoes. The one guy that looks to be front and center, is soon to be senior, wide receiver/line backer Jake Roh.

Quietly, Jake Roh has been one of Arizona’s most reliable wide receivers after catching 17 touchdowns in his junior season. A season that brought in Division I offers from Arizona, Oregon State and Duke.

“He feels like this year, it’s his team,” explained new Chaparral football coach Dave Huffine. “He has really made a mark in the weight room and he has really kind of put his stamp on this team by just going out there and working hard. When you have your best football player on your team that’s your hardest worker good things are going to happen.”

Pros2preps.com caught up with Jake Roh and discussed how he intends to lead this Firebird team, where his recruitment currently stands and what he has to say for the nay-sayers who think Chaparral isn’t a clear cut favorite like they have been in years past.