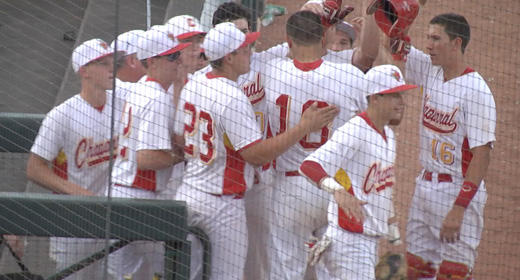 The way this game started you would think it would have been a very quick afternoon for the Chaparral Firebirds against the Sandra Day O’Connor Eagles.

Despite coming away with the 3-2 victory, that was absolutely not the case.

Chaparral had the bases loaded in both the first and second innings but only managed to get two runs accross home plate. In fact after three innings, the Firebirds had left eight runners on base.

Credit to O’Connor pitcher Michael Gonzalez who hung in there and continued to pitch.

However, Chaparral starting pitcher Nick Diamond countered Gonzalez with a gem of his own. He threw four shutout innings, pitched five innings total giving up only one run on three hits.

Chaparral added a small cushion to their lead in grand fashion. University of Arizona commit Dylan Cozens crushed a ball over the scoreboard in right center field. Which made it 3-0.

O’Connor would get two runs later on but it was to little to late. They received their first loss of the playoffs making them a loss away from elimination. They face Pinnacle at 4:00pm on Tuesday at Phoenix Municpal Stadium.

Chaparral remains one of two unbeaten teams left in the postseason tournament so far. They face the other unbeaten, Brophy at Camelback Ranch Stadium in Glendale on Thursday at 6:30 p.m.