With the 2012 Olympic games approaching this summer from London, England, the Arizona State Swim and Dive time has three possible Olympion’s that could represent three different countries.

Rebecca Edjervik is an all-world breastroker from Vellentuna, Sweeden. The Sun Devil Senior Captain has represented ASU twice in the NCAA’s and hold school records in the 100 meter breastroke and in various relays.  Edjervik was a finalist in this past summers’ World Championships for the 50 meter breastroke.

Constantin (Coco) Blaha competed in the 2008 Olympic games where he finished in 22nd as a member of Austria’s Diving Team. The Sun Devil senior represented ASU in the NCAA Championships last season where he finished third.

Caroline Kuczynski is a versatile butterfly and freestyler from Coral Springs, Florida but hopes to represent Team Canada in the 2012 games. The Sun Devil junior competed at the NCAA Championship in the 200 meter  butterfly and the 100 meter butterfly.

Make sure to keep tabs on these three all-world athletes as the look to not just represent their countries but also the Arizona State Community in the 2012 Olympic Games in London this summer. 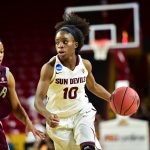 ASU takes care of business against Oregon State, onto biggest game in quite some time